Most people do not know that there was some politics that happened prior to the formation of the Big 12. I do not profess to know everything that happened in the closed door conferences but I know what I know, and I can only speculate about the rest. 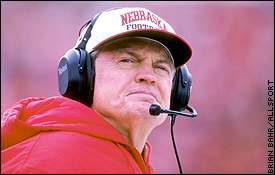 On the partial qualifiers rule, Osborne said, “Where this rule can hurt you is if a player is considering Nebraska and Ohio State or some other school in the Big Ten.” Osborne was an historically deft recruiter, but it’s always difficult to recruit and get a kid to play in Nebraska. The weather in Nebraska is one thing, and the idea that there isn’t anything to do in Nebraska is another.

Most of the Big 12 votes in the behind closed door offices went pro-Texas, anti-Nebraska and anti-Big 8. It wasn’t that way in the beginning, but it slowly shifted that way. It was reported that Tom Osborne was a little shocked at the way things progressed in these closed door sessions. It was reported that a Kansas official said: “Tom, you guys have been winning for so long.” Many think that there was some jealousy among the little six of the Big 8, and that they wanted to do something to do something to poke a hole in the Oklahoma/Nebraska domination of their division. Others have said that the little six voted the way they did, because they didn’t want the Texas teams (the Longhorns in particular) to go elsewhere.

As a result of losing all of those votes (votes that often went 11-1 against Nebraska) Tom Osborne “upped” his recruiting for the 1994 class, and had a plan to retire after they graduated.  The implicit note here is that Osborne so detested the new rules that the conference would instill that he would not coach under them.  The rules on partial qualifiers went into effect in 1995. Tom Osborne won national championships in 1994, ’95, and ’97. He then retired from football and became a U.S. Congressman for the third district of Nebraska.  Following this, and a failed attempt to run for Governor, Osborne became Athletic director in 2007.  After three years it is apparent that the Cornhuskers will be moving to the Big 10.

Why is this? Some would say Osborne has some animosity for the way the little six turned against him, the way the Texas schools bullied everyone into making the conference a Texas friendly conference, and the way that the Texas schools (Oklahoma and Oklahoma State included) benefited from the rules while Nebraska and the little five of the North side of the division were somewhat damaged by the new conference.  Some would say that Tom and the president of the University of Nebraska at Lincoln simply saw this as a smart move, and that the Big 12 would eventually begin to devolve anyway.

Osborne has played this very close to the vest.  He has said he has no animosity for the Big 12.  This may be the case, but I’m sure that he saw the move to the Big 12 as a bad business proposition for Nebraska.  I’m sure he knew how difficult it would be to recruit players to Nebraska under the new rules.  As evidence of this, look at Nebraska’s performance in the Big 12.  The Big 12 rules may not be the only reason Nebraska underperformed over the last decade, but it’s one of them.  Tom won’t say it, but I will.  To those in Kansas that have misgivings about Nebraska leaving the Big 12, I say suck it!

What will happen to Kansas and Kansas State?  Who cares, I say. KU and KSU should’ve done more to make NU happy behind closed doors.  They should’ve listened a little more to what Tom had to say about the rules favoring the Texas schools. But KU has been a traditional basketball power, and KSU just finished with a two seed in the tournament and went to the great eight.  PThhhht (my attempt at a raspberry online) who cares?  Nebraska is a traditional dog in basketball.  It’s about football ladies and gentleman.  KU and KSU can suck it.

I don’t care what some of the experts are saying, this will be huge for NU and huge for the Big 10. NU may be hurt in the competition for the Texas recruits, but it will now be able to delve into the Ohio, Michigan and Pennsylvania talent pools. NU would also double its revenue in the Big 10 from 10 million to 20 million.

My prediction: NU will join the Big 10.  I think Texas will too, and not the Pac-10, as has been reported.  I think this will leave Missouri, KU, KSU, and Baylor without a conference.  OU will join the SEC, and the remaining teams will join the PAC-10.  It’s sweet revenge on Kansas, leaving them out in the cold. They managed to get a couple good years, but with Mangino gone the program will suffer sorry Turner.  You were a great Husker but you are now a victim of circumstance.

As for the Penn State fan who posted that he hates the Huskers after the Huskers stole a National Championship from them in 1994, I say two things.  One: Penn State stole one from us in 1982 with the two Todd Blackledge passes, and Penn State decided to join the Big Ten prior to 1994. In 1994, the Big 10 remained committed to the Rose Bowl for their division’s champion. As a result, Nebraska was not able to throttle PSU in the Orange Bowl.  Nebraska need I remind you, lost the national championship by a field goal in 1993, won the championship in 1995, and again in 1997. If anyone thinks that PSU would’ve beat Nebraska in 1994, then you need to go back through the record.  These were some of the greatest Husker teams in school history, and some at ESPN have declared that they were some of the greatest teams ever.