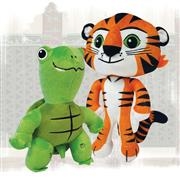 My son has a very healthy imagination, and I encourage it in every opportunity I can. We play all sorts of imaginary games, some involving his stuffed animals. We put these animals through various life scenarios. I am in charge of developing these stories, but he will often spider web these stories into other side stories. In one of these sessions, he gave his stuffed turtle an unusual name. Playing the role of the tiger in this production, I asked the turtle if his parents were weird. “If they gave you such an unusual name,” Tiger said, “your parents must be weird people.” I was not testing my son, or playing any type of psychological game. The reader might flirt with such notions, because it was an odd thing for a dad to say to his six-year-old son. My only defense is that we play so many of these games that he wears me out.

Tiger pressed turtle for an answer on this question, and the turtle refused to denounce his parents in anyway, saying, “No, I have great parents who love me and don’t let me get hurt.” That was all turtle said, and we moved into other areas of the turtle’s life story. Months prior, someone suggested that my son’s lack of displays of affection could suggest that he might be on the spectrum. Boulderdash, I say. I say his lack of displays of affection means that his parents are doing one hell of a bang up job. I’ve seen my son’s six-year-old friends worry when they can’t see their parents at the park. ‘Shouldn’t that be the other way around?’ I wonder. I know my son doesn’t worry about such things. I know he considers every minute we can’t see him a momentary minute of freedom. I’ve witnessed other boys appreciate their parents. I’ve seen other kids his age, kiss their parents without them having to ask for one, and my reaction is 180 degrees different from envy. I think if a six-year-old voluntarily displays affection for their parents, it suggests there might be some deficiency in their home. It’s a guess, and it’s probably wrong. Some six-year-old boys are just more affectionate than others are, but that just seems so unnatural to me. If my six-year-old boy says, “Leave me alone”, and he hates hugs and kisses, it means he takes me for granted. He takes it for granted that I’ll always going to be there for him, and he knows that I will always “protect him from getting hurt”. As a person who has never had a parenting job before, it strikes me that if you’re doing your job, your child should be surprised to learn that other kids like you and think you’re fun to be around you, because he thinks you’re one of the most boring people on earth. Then, if you’re doing one hell of a bang up job, you might eventually reach a point when you’ll hear how much he appreciates what you do from his turtle.

The Death of a Gregory

A forty-something man on our block died recently. It’s a sad thing when any person dies that young, but I didn’t know this guy as a man. I knew him as a rival when we were in our early teens. One could go so far as to say we “hated” each other in the harmless way young, testosterone-driven teenage males hate each other. We did whatever mean, harmless territorial peeing things that two teenage boys do to each other. I tee peed his house, he egged mine, I threw an M-80 in his yard, and he shot a bottle rocket under our car. I sidewalk chalked something awful about him on his driveway, and he lit firework snakes on the sidewalk leading up to our house (some of those stains are still there some 35 years later). I spotted him on our old block some 35-years later, and I waved at him. He did not wave back. He apparently believed that our teenage rivalry should extend into our forties, and I found this out soon after I waved at him. I was driving into our old neighborhood, and he was driving out when I stuck that hand up. He gave me the nastiest look he could. That look said, “I don’t like you, and I never will!” That’s fine, I guess, but how about I wasn’t asking if I could come over for dinner, or if I could play with his Star Wars figurines. I was putting my hand up in the air to him as nothing more than a momentary, symbolic greeting. It’s your job, sir, to put your hand up in the air back at me! You don’t have to smile when you put your hand in the air, and a wave is not a promissory note on future conversations. You just wave back, and everyone moves on with their lives. It’s what we adult humans do when we somewhat, sort of recognize each other. If you can’t forget the things I did to you at 13, well, that’s kind of on you. If he was still alive, I’m sure he could give you a laundry list of things I did to him, but I don’t remember them, and none of them would post date 1983. If anyone suspects that I bullied him, and it affected his personality in such a way that he could never forgive me, I can only say this in my defense, this kid gave as well as he got. When my family would drive onto our block, he would have a special twinkle in his eye when he spotted me, knowing that we would be spotting his latest bit of carnage. When I saw how much he enjoyed this, I realized what I was up against, and I stopped. He didn’t, and he apparently didn’t want to let it go 35 years later.

He Stuck a Foot Out!

Sports announcing is a cut-throat business. The candidates for the top jobs in sports announcing must be knowledgeable, but they must also have an extraordinary way to display excitement to win the job. I know that’s not an earth-shattering revelation, but when I hear a hockey announcer almost lose his lunch when a goalie sticks their foot out, I see the profession for what it is.

As we watch the replay about seven times, the color analyst speaks about the command the human being playing goalie has of his body, as if it’s something he’s never seen it before. “I hope the viewers at home recognize how brilliant this save was,” the analyst says with reverence as we watch it. “To have the wherewithal to know not only how, but when, to stick that foot out, you just can’t teach that. The goalie is in the zone, and he’s just playing on another level.”

As one who has never played hockey, I have to imagine that sticking a foot out is the very thing they teach goalies that when that goalie see a puck nearing the goal line. It is not our intent to diminish the athleticism it takes to play goalie in this piece. When a puck is traveling at a high rate of speed and the goalie has a center in front of him, trying to block his view, and that goalie gloves the puck, it’s impressive. Those of us at home know we probably couldn’t do that on a regular basis. When a wing flicks a puck to the goal and a goalie sticks his foot out to stop its progression, however, that’s just what we call sports.

The key to most sports (spoiler alert!) is to cross lines. The other people on defense don’t want the offense to do that, so they will use the parts of their body to try to prevent that from happening. The idea that a person puts a hand out to block a pass, and another puts a hand out to catch that pass can be brilliant at times, but most of the time it’s just a guy doing what he’s practiced for years. If an announcer can convince a viewing audience that it’s a brilliant display of athleticism, they will win the job.

Some of my favorite moments of inspiration arrived in tight spaces. My manager put me on suspension. “Get your numbers up, in 90 days, or you’re gone!” he said. With my little world crashing down around me, inconvenient flashes of inspiration bombarded me. Some were so good that I felt required to write them down. A guy interrupted me with a question, and I thought his mannerisms were perfect character-driven piece. The inspiration for another piece arrived when another fella said goodbye to me. My mind was on fire when I heard a set of lyrics from a Sufjan Steven’s song, and those lyrics inspired a novel I would spend the next two years writing. These were all inconvenient interruptions that took time away from the moments I should’ve spent trying to get my numbers up, but I couldn’t stop them from pounding into my brain.

It wasn’t a great novel, it turned out, but the inspiration for it struck me during a very inopportune moment of my life. I’ve had these moments before, I think we all have. They’re the “You’re not supposed to think about that now” moments when creativity seems to flourish. I had an “in-class” friend one time. We engaged in “what you’re not supposed to do” fun in class, when the teacher wasn’t looking. We developed a temporary, very real bond misbehaving, but when we ran into each other in the hallway, we had nothing to say to one another, other than a conspiratorial “there he is” point. I used to love to make my brother laugh in church, with stupid, little in-jokes that would not have been funny anywhere else. We were having naughty, “You’re not supposed to do that here” fun that required subtlety and a deft hand to avoid getting caught. Was that what my brain wanted, with my job on the line and my boss watching every move I made? Regardless, my mind was on fire with naughty, “You’re not supposed to be thinking that now” thoughts that I would spend the next two years completing.

I did manage to quiet the inspirations long enough to survive the suspension, and I spent the next five years juggling my need to be creative and the need to be productive for the company. I wouldn’t say that these tight spaces always resulted in creative inspiration, but I was never come that close to losing my job again, and I would never have that much inspiration flooding my brain either.