Imagine that someone tells you that an artist’s self-portrait is now on sale.  “Who is it?” would probably be the first question you ask, and if it turns out to be the work of a relative unknown, “What’s his story?” would probably be your next.  If the answers to these questions aren’t very satisfying, all of your follow up questions would probably involve the story behind the particular self-portrait painting in question.  If these questions yield no satisfactory answers, your final question might be, “Why should I be interested in this piece?”  The quality of any artistic piece is subjective, but most art enthusiasts generate enthusiasm based on a number of factors, most of which have little to do with the actual quality of the piece.

It may be a little unfair to criticize the desire some art enthusiasts have for “a story”, or more information, of a self-portrait of a relatively unknown author before vesting any interest in a piece, but in the case of artist Bryan Lewis Saunders such interest has been generated.  This event leads to the question, how does a relatively unknown artist generate interest in his work?

That’s easy: paint a masterpiece.  Most works of art are not masterpieces, however, and they fall into the subjective, relative arena of appealing to the patron on some level.  Very few pieces of literature, musical productions, or sculptures are so great that they can attract an audience without a great accompanying story.  Most art falls into the middle ground of subjectivity, and it’s that subjectivity that requires a great story we can identify with, or that which tantalizes us in some fashion. 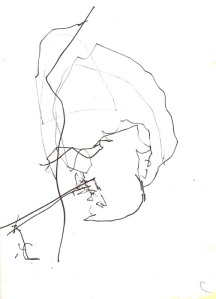 The self-portraits of Bryan Lewis Saunders appear to be –to the non-enthusiast crowd– marginal works of art at the very least.  For those that are interested in making their own determinations on his art, these works can be viewed here and here.  In the second link, and in Jon Ronson’s piece on Mr. Saunders for the Guardian, you can learn of the story behind these self-portraits, and how they involve Mr. Saunders doing roughly fifty different self-portraits on fifty different drugs, be they of the prescription or controlled substance variety.  This story has generated a tremendous amount of interest in Mr. Saunders, and his work, and it appears to have added tremendous value to his pieces among the chichi crowd that wants to have his story hanging on their wall.

Let’s say, for a moment, that I’m right about the artistic merit of Mr. Saunders’ work, and the greater value exists in the narrative.  Are you one that would love to give that narrative to visitors of your home?  Are you one that would love to have a Saunders hanging above your shabby chic armoire, so that you could say, “Mr. Saunders did that while wrecked on the prescription drug Klonopin, otherwise known as Clonazepam.  And let me take you down the hall here,” you say with excitement.  “This is Mr. Saunders interpretation of himself after experimenting with butane honey oil, and in our master bedroom is my personal favorite that Mr. Saunders created after taking 250mg of Cephalexin.  He actually mixed some of the cephalexin into the painting with water and a watercolor pencil.  It’s the prized piece of my Saunders collection,” you say with pride.

If your audience isn’t necessarily impressed with the paintings, they would probably find the narratives so exotic, that they probably wouldn’t want to discuss the actual artistic merits of the piece.  They also probably wouldn’t want to enter into a moral discussion of recreational drug use, and how your piece seems to glorify it in some way.  Most people do everything they can to avoid appearing puritanical, and they want others to perceive them as hip and cutting edge.  That having been said, if the pieces are as marginal as I believe them to be, most of your friends will silently wonder if your interest in the narrative may have clouded your judgment.  They would probably not call you out on it, however, with something along the lines of: “So, if it came out that Mr. Saunders was actually completely sober when he did these pieces, would you feel like you were robbed?”

What if you spoke to the author of the painting, at a gallery that presented his work, and you found out that he was actually a loving father of four that had a full time job as a UPS truck driver, and he did the particular piece you love on a caffeine buzz, as a result of putting down an extra cup of Folger’s, and the only reason he came up with the whole “drug thing” was to build some sort of mythology that his artistic career lacked.  Would you give that narrative to prospective admirers?  What if it turned out that this author had a sensible haircut, wore Levi’s jeans, and spoke in a manner that never wavered from the Queen’s English?  How would you enhance your admirer’s enjoyment?  What if your friend didn’t enjoy the piece you purchased, what kind of defense would you have?  What would it say about you that you even purchased such a piece?

Too often, the definition of art is conflated the image of art, and we like those images to be festooned with notions of troubled, reclusive individuals that suck in a potent drug at high volume; and we prefer them unhappy, inconsistent, singularly focused, and driven by the vagaries of the heart as opposed to a concrete, rational mind.  We want to hear that our artists are so singularly focused that don’t understand how toasters work; that they didn’t know how to tie a tie, until they were forty; and they don’t understand the intangible merits of kissing.  The only images we want in artistic profiles are those of quirky individuals that never learned how to fit in with society properly.  The normal person that happens to have a creative flair about them are just not very interesting, so we choose to believe that all artists, true artists, fit an image we’ve constructed in our head.

If you’ve ever watched a docu-drama about an artist, you know these images well.  By the time these movies are over, you’re left with the impression that it’s far more virtuous to be labeled a creative genius than it is to create art.  The constraints of these entertainment vehicles being what they are, the director cannot have a 90-minute movie about a guy painting.  That wouldn’t be very entertaining.  It might also be just as boring to have the characters sitting around discussing interpretations of the pieces, but when the directors of these movies portray the polar opposite, and focus on nothing but the narrative behind the artist, and the subsequent image of the artist, the notion of the narrative of art being more important than art is fostered, until it’s possible that some truly brilliant, yet unnaturally normal artists could remain obscure.

Those of us that have heard about the near divine inspiration that informed the masterpieces we all know, occurred within an elegant hotel room that overlooks the streets of Pamplona, Spain –where the running of the bulls occurs– begin to question these narratives after hearing them for the thousandth time.  Is it a marketing campaign that they use to influence the perception of the final product, or do some people really go to “different places” and receive a degree of insight into the human condition that overwhelms them to such a degree that a seemingly inhuman masterpiece is born?  It’s possible, and it’s likely that it has occurred on occasion, but for the most part, most art is created in boring places, on the backside of all of the mundane routines, and the dogged determination that has persevered through all of the trials and errors that eventually led to a product that an enthusiasts might find so pleasing that they litter their walls and book shelves with them.

Artistic brilliance can be defined as an individual perspective of the world, and the presentation of said material.  It can come from the most unusual places, but it can also come from such usual places that it doesn’t fit the mold of artistic brilliance.  Does this presentation of material require a narrative, does a well-crafted, somewhat spruced up narrative make a final product more beautiful or more interesting?   Maybe, maybe not, but I’m sure that every mid-level artist that has made their way into the chichi art world would tell you, it doesn’t hurt.

Mr. Saunders work can be used as the idyllic form of the mold, but it shouldn’t suggest that there is any less merit to the artistic creations Mr. Saunders decided to produce.  That’s his art, his niche, and it’s what he does, and how he perceives the world through a purposely unfocused lens.  What should bother anyone attempting to create art is the manner in which the world views the artistic world.  If you create an excellent piece of do you have to indulge in mind-altering substances to tantalize the imagination of the chichi contingent, or should you just lie and tell them that’s what you’re doing?  My advice would be to do the latter, and simply give them a narrative to sell to their friends.  Your art may be better received for it, and you may be invited to live the artistic life, for the chichi crowd is vehemently against drug-testing, even if it means that they’re being duped into believing in it.