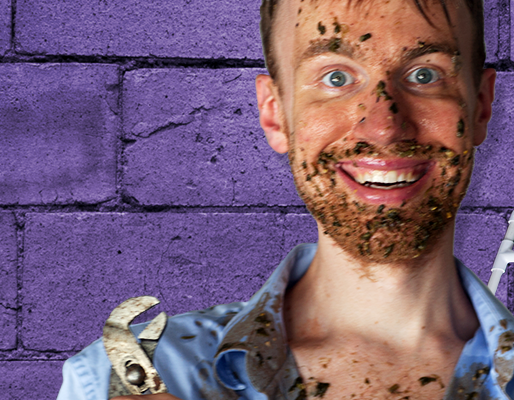 “In my professional opinion,” a plumber said. “I think we’re stuck.” The plumber said that after assuring me that a cranking mechanism on his truck would make “easy work” of snaking the sewer line of my home. He allowed that mechanism to snake the drain for about fifteen minutes. When that didn’t work, he attempted to assist the mechanism manually. He finally turned the mechanism off and attempted to perform the task manually.

I was impressed when the plumber informed me that his mechanism would make this a quick process, for that went against everything I heard. Everyone from the tree experts I talked to, to the plumber that snaked this drain before told me that the silver maple leaf was the worst possible tree a homeowner could have when it comes to plumbing. Our silver maple leaf was about sixty-feet tall, and the previous plumber informed me that that means it probably goes sixty feet down, “and as I’m sure you can guess, a sixty-foot tree does not go straight down. It builds itself a foundation by spreading outwards infiltrating whatever is in its way.” I told this current plumber this, but he insisted that his truck’s cranking mechanism would make easy work of this task.

“Just watch,” he said before flipping the switch on the crank.

The crank on the plumber’s truck did make some progress before we reached that point of being stuck. Evidence of that progress lined my basement in the form of piles of debris on newspapers throughout my basement. The debris consisted of numerous silver maple leaf’s twigs and some dirt that I assumed followed the twigs in the drain.

“Well,” I said, looking down at one of these piles. “It should be easier to work through since all the dirt is wet?”

“You’re kidding, right?” he said looking down at the same mound of debris. “There is some dirt in there, no doubt, but most of that is not dirt.”

I looked at him in confusion for about half a beat, until it dawned on me what he was saying. I colored with embarrassment for a moment. “Wait a second,” I said, “isn’t that what we’re supposed to have in there?”

The plumber’s confidence turned out to be false bravado, as evidenced by the fact that the effort he put into trying to clear the drain physically drained him. His hopelessness led him to consider calling a professional colleague at one point, and he considered calling the home office for advice. “I hate to ask you this,” he said, “I’ve never done this before, and I’m sure my colleagues would frown at this, but could you help me?” After I agreed to do just that, he added, “I think the two of us could do this together, don’t you?” He put me on the lead, and he said he would also be pulling from behind. He then added, “I want you to pull as hard as you can, of course, but when I say stop. Stop.”

He asked me to look at him, and he repeated that line to make sure I understood the importance of stopping. I told him I would do as instructed. As I began to pull, however, I began making significant progress. It was obvious, at one point, that I was making more progress than a certified plumber had. I was proud. He was helping me to a point, but when I started making real progress, he stopped pulling from the back and said, “You’re getting it.” That led me to start pulling even harder.

I don’t know about anyone else, but when another fella tells me that I’m displaying feats of strength beyond his own, it invigorates me. When I’m outdoing a professional on his own profession, I try to live up to that compliment and expound upon it. As I sought to expound upon it, the primary source of our concern appeared in the sewer clean out fitting built into the wall of our basement. I was excited, I thought I was accomplishing something huge, but the plumber informed that working it through the fitting was often the hardest part. I had this in mind, coupled with the progress I made, when I began pulling for what I thought would be one last time. It wouldn’t happen on the first couple of pulls, as the entanglement popped up in and out of the fitting on the side of the wall like a ground squirrel taunting its tormentor.

After those first couple of tantalizing pulls failed, I let the snake go slack and regrouped for one final pull. I inhaled and grabbed ahold of snake line, and I put everything I had into one final pull.

“Stop!” the plumber shouted. He was too late.

The mass, that was not dirt, entwined with silver maple leaf twigs, finally made it through the fitting. Its release, combined with the force of my pull, caused me to fall backward until I was flat on my bottom. The result of that fall not only prevented the mass that was not dirt from hitting me, but it put me in a perfect position to watch the mass fly up over my head.

As anyone with a basic understanding of physics can guess, this did not happen in slow motion. It happened so fast that I didn’t see the glop hit the plumber in the face, and I didn’t have enough time to see if the plumber failed to duck in time, or if he accidentally ducked into it. Regardless what his reaction was, some of the glop that was not dirt landed on his nose and eyeglasses.

It took the plumber about two seconds to digest what happened. Once he did, the expletives flew. One of those expletives could adequately describe some of material in the glop that was not dirt, now on his face. He blamed me for not stopping when he told me to, he blamed himself for not calling in a professional colleague to assist him, and he displayed some anger at the world for a moment. Throughout this understandable tirade, the plumber did not wipe the glop from his face. He just stared at me, and with me, in mutual disgust for what just happened.

“This is, by far, the most disgusting thing that’s ever happened to me,” he said after he cooled down a little, “and I’m sure you can guess that this profession has provided me quite a list!” That was a good line, I thought, and I wasn’t sure if he valued good lines as much as I did, but I wondered if he allowed this glop to remain on his face, because he thought his appearance might enhance the comedic value of such a line.

I don’t know what he was thinking, or if I was assigning my values to his reaction, but my guess was his years spent as a plumber raised his tolerance level for that which others consider unspeakably disgusting. What I couldn’t understand, however, was his ability to stand there with that on his face without feeling embarrassed. I also couldn’t understand why wiping this glop off his face wasn’t an instinctual response. Whatever his reasoning, he continued to leave it on his face to deliver one last comedic line, “All I can say, and I never thought I’d be saying this, but I’m glad I need to wear glasses.”