“They’d listen if I complained,” a delusional friend of mine said moments after I told him I went to the boss man and complained, and that I didn’t think that my complaint would register.  He said this in the midst of one of my fell-fledged rants, and he said in such an egocentric manner that I felt he was in dire need of a reality check. 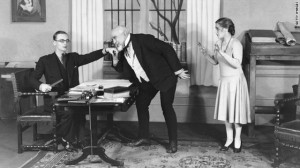 And if the world operated in a fair manner, my friend would’ve been an employer’s dream.  He was a hard worker, and an eager student for those that could inform him how he could do his job better today than he did yesterday.  He was a quiet man that didn’t want to socialize on the clock, and he even tried to avoid drinking soda, not for health reasons, but to avoid taking too many trips to the bathroom on the company dime.  He tried to avoid speaking in meetings, because he didn’t want to be perceived as a complainer, or trouble maker.  He wanted to do the work he loved and be compensated accordingly.

He believed in the old adage that if you kept your head low, and your nose to the grindstone, they noticed.  They may not have said anything to him, but “trust me they notice.  And if I ever did complain, all that hard work, and obeying the rules, would pay off.  Trust me.”

I had worked for too many corporations to trust him however, for I knew it was human nature for an employer to take model employees for granted.  I did not have the temerity to tell him that his beliefs were delusions, however, and that he would one day have his unhealthy delusions shattered.

When I would later read, in a Psychology Today article, written by Merel van Beeren*, is that psychologists believe that the delusional are exhibiting greater mental health than I am.  This would prove to be a direct contradiction of the beliefs I’ve had about the unhealthy nature of the illusions and delusions we have about the power and control of our day-to-day lives.

“People overestimate their agency, but it’s for the best –those with an accurate sense of their own influence are often depressed.  Participation in lotteries goes up when players can choose their own numbers, even though they are no more likely to win.”

“I choose to stay employed at the company,” is something we might say to bolster this argument.  “If the boss man changes the rules on me in a fashion I don’t care for, I can always quit.  It’s not like I’m being held against my will, or locked into employment at this company.  This is America, the land of opportunity, and there are numerous opportunities out there for someone like me.”

“Well,” we say, “I guess I do have the option to leave the company I work for, and I guess I could drop out of the workforce altogether if I want to go live with my Mom, but I have chosen to live free of those constraints.  I have chosen to live by certain constraints, beset upon me by my boss, so that I might be a self-sufficient individual who lives free based on the payment he gives me to live within his rules.”

The point, as I see it, is most of us do not view these matters in such constructs.  We think everyone has to have a job.  There is a “40-hour a week, paycheck on Friday, and put up with constraints” mentality that we have.  If you think this is an exaggeration, try quitting your job and going out on your own.  Try existing in a realm that is free of constraints in a relative fashion.  The first, and most prominent aspect of life that you’ll miss is the routine of a work day, and then you’ll miss the structure that that mentality provides.  You’ll feel an odd sense of worthlessness that you cannot explain, because you’re used to being a drone, and you’ve trained yourself to be an employee and to accept what the boss man says.  You’re locked into this mentality.

In the freest country the world has ever known, we get locked into a mindset that this is all we can do, so we will put up with the boss man’s constraints.  In order to support ourselves, and continue to be free, and self-sufficient, we make compromises.  But Where is the Line? the singer/songwriter Bjork once asked.  Where is that line between the freedoms we give up and the freedoms we enjoy, and how much freedom are we willing to give up to be free?  As the writer of this Psychology Today article suggests, analyzing all of this can lead to depression, and it’s much healthier to delude one’s self into believing that we’re free and in total control of our own universe.

It’s much healthier, for example, to believe that we have some say in the rule changes that the boss man employs than it is to examine how valuable we are in lieu of the changes the boss man has made to affect our work dynamic in a negative manner.  It’s much healthier, to think that we are such valuable employees that there is some fear in the boss man that prevents him from making such drastic changes that would affect our decision to stay with the company than it is to acknowledge that the boss man often decides what is best for his company’s bottom line first, what is best for all of his employees second, and then what is best for the individual employee last, unless we fit into the second group of course.  If we don’t, the boss man will find a way to sell his change to us in a manner that satisfies our ego.

There is a great website out there that has a single joke on it.  It’s called Office Versus Prison, and it details how the office space mirrors the day-to-day activities of the prison.  The following are a few of my favorites:

IN PRISON…you can watch TV and play games.
AT WORK…you get fired for watching TV and playing games.

IN PRISON…all expenses are paid by taxpayers with no work required
AT WORK…you get to pay all the expenses to go to work and then they deduct taxes from your salary to pay for prisoners.

IN PRISON…there are wardens who are often sadistic.
AT WORK…they are called managers.

My friend lived with the delusion that if he ever decided to take the floor and complain, the higher ups would sit up and take notice.  Things would change.  ‘They may not listen to the average employee, but they’ll listen to me,’ was his mindset.

I would barrage him with a list of complaints I had about the way things were done on a week-to-week basis.  He would remain quiet, with a quiet smile on his face.  “Doesn’t that frustrate you?” I would ask.  Most of them time it didn’t.  Most of the time he had already developed a rationale for the way things were done, but some of the times he would get just as enraged as me.  “Too bad there’s not a darned thing we can do about it!” I would say to sum up our unified frustration on those occasions.  I would tell him that I complained to the boss man, and I was given some lame excuse for why things would continue to be the way they were.

“They’d listen if I complained,” my friend said.  Of course that statement bothered me, as it fed into my insecure belief that, in Merel van Beeren’s words, my friend’s agency was more valuable than mine in the company.  I told him that he, again in the words of van Beeren’s, overestimated his agency in the company.  I warned him that there would come a day when he risked letting people know his opinion of the way things were done, and he would find out that the boss man just wanted him to shut up and go back to being that face in the crowd that accepted his changes for what they were.

My knowledge was not theoretical.  It was firsthand knowledge that I gained by being a man that kept most of his complaints in check, until that moment arrived when something meaningful came my way.

I used to think that if you picked your battles for subjects that you had deep concerns about, the boss man would be more apt to listen.  I was wrong.  I learned that the boss doesn’t care for complaints, and he doesn’t give more weight to complaints that come from a person that doesn’t complain often.  They just want you, and the person that complains all the time, to shut up and learn your station in life.  Coming to that realization was, as Merel van Beeren pointed out, caused me a sense of depression that I wished I could walk back.

My friend did complain about the way things were done, after a time, and he found that he had overestimated his agency, and he quit the company.  My friend didn’t quit right away.  He loved the company, but his moment of epiphany was just as painful as mine.  He learned that by avoiding the complaint, you don’t gain the respect of the boss man, you slip into the favored status of rarely seen, never heard, and the minute you pop that delusion, you shatter everything you once held dear.

If Merel van Beeren is to be believed, and I must say he puts forth a pretty decent argument, my friend was the healthy one in our friendship, until I poked so many holes in his delusions that I brought my unhealthy skepticism to his life and depressed him.