Cool dudes are out there, and nonconformity is their thing. They seek out that which others consider odd. They know that they are trendsetting fashionistas, and that everyone they know, knows it too. They know it better than we do, and they know that they’re not rebelling. They don’t care for labels. This is just who they are. They preach their nonconformist tastes to every fake nonconformist in their inner circle, and they get off on the fact that we don’t understand them. They are the only true nonconformist they know. They don’t fall prey to the whims of the Man, that fat cat, or the Scooby Doo bad guy, CEO that smokes cigars he lit with $100 dollar bills. They are an individual with selective, refined tastes that supersede everyone else’s tastes, and this is your status in their world. They are the true nonconformist. 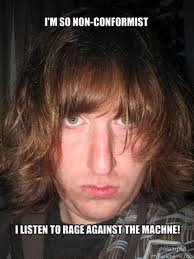 In our youth, it was possible for supermarket chains to have multiple items in the breakfast row. They had the cereal section, in that row, and that was bracketed by other breakfast-related items. The variety of cereals have grown so varied that there is but little room in that side of the aisle for Pop Tarts and other breakfast related items. A shopper is more apt to find maple syrup, and other smaller items on the opposing side of the aisle, or in another aisle altogether.

Walk into any cell phone store, and we’ll see a number of phones that conform to the function of nonconformity, but we’ll probably see that store for what it is after a while. We’ll start to realize that these stores appeal to our sense of non-conformity, or our elevated knowledge of the technology of one phone versus another that we’ll end up skipping that store to go to the one three stores down that appeals our knowledge and our sense of non-conformity. If we are so well informed that we know that neither of these stores provide the degree of technology necessary to suit our needs, boy, have we got a store for you online.

If you’re willing to pay a little bit more for a socially conscious store, we have a whole line of products for you, and they are friendlier to the environment, they have “We support Green Peace” stickers on all of their products, and anything and everything we abhor about what is being done in the South American rain forests. Let those poor suckers continue to buy their inferior products from store A, but they should do so with the knowledge that they are not down for the cause.

The capitalist pigs of the cell phone industry, the clothing industry, the electronics industry, and the leather wallet industry know more about your selection process than you do. They know that our discerning, refined tastes are such that we would never buy a candle wax that is distilled from “Big” oil. Our preferred candle is composed of a wax carefully removed from honeycombs created by bees, so as to not disturb their honey making process or their larvae storage. They also know that to cater to their clientele, they will be required to provide an example of this process to all concerned consumers in a video on their website. These stores know, probably more than any other outlets, that the success of their niche market depends on making their customers feel more socially conscious, more knowledgeable, and more empathetic, and as such it will be required of them to provide their customer base an outlet through which they can further detail their pleasure, or complaints, with the products they sell in their store. As such, they will have some sort of comments section on their website that they will have to monitor on a daily basis, for even the most simple reply to the comments on the website will substantiate the long-held beliefs of their customer base. All they will have to say is something along the lines of “You’re right Doogie Howser232, we will address your valuable information at our next meeting.”

We are all victims of our own knowledge of markets and political consciousness. We make decisions in life, based on what we read and know. Our discerning tastes based on knowledge are studied and commented on in board meetings, and there is nothing special about us. We are members of a demographic, and if we do manage to somehow become an outlier in anyway, there will be a new market created to suit our new stratified needs and desires.

This new market will want to know how much we now “know” about phones and clothes, and they will soon find a way to appeal to us on a new, knowledge level. They want to understand what shaped our new knowledge, and why we think that way, and they want to have that perfect product ready for us when we’re ready to open up our pocketbook.

But I am a true nonconformist, rebels that doesn’t give a durn about any of that nonsense. The capitalist pig machine can shrivel up and die for all I care, but you’re adding to it poopy bear. We’re all creating, and adding to, a diversified and stratified market that has existed longer than we’ve been alive. We can say we’re rebels, but the month after we claim a new discerning taste, a rebel store will open up with all kinds of new, rebel paraphernalia to appeal to us. You’re a punker you say? Well, where did you get all your punker gear? Did you make it by hand? No, well, what else do you have in that Punkers R’ Us bag?

It’s called consumer rebellion, and it’s become such a primary staple in the capitalist pig, American system that capitalist pigs have opened up a store in just about every mall in America just for us? We wear a constant, nonconformist snarl, how can a capitalist pig sell a snarl? We can’t, but we can give you everything you need to bracket that snarl. We can sell a suitable get up that frames that snarl in such a way that it can make it more powerful during rebellious consumption. We can buy a tongue stud at this store, but for those who want spikes in the shoulder pads of their leather jacket we may have to go to the store three doors down and across the hall, and to buy the latest rebellious, nonconformist punk rock album, we’ll have to go down to the first floor. The current, capitalist pig system in America today needs you! and your rebellious consumerism to survive and thrive.

Tattoos were once the epitome of rebellion. An individual could define himself as an outlier with one simple, strategically placed tattoo that was somewhat visible, but not so visible that it was obvious. An individual with a tattoo attained instantaneous conversation status. Everyone has one now, so the true rebel got two, then three, and finally four, until four wasn’t enough, and the whole body art market rose from the back alley to strip mall status. How embarrassing is it to thee true rebel, tattoo aficionados that this market rose to the level where a consumer in Omaha, Nebraska found that tattoo parlors began to compete with Burger Kings in the total number of locations?

People, from the lowest marketer go to the fat cat CEOs, want to know what we’re buying and what we’re consuming, so they go to our favorite Euro bar to find out what the latest nonconformists are wearing, drinking, eating, and in all ways consuming. There’s a whole lot of consuming going on out there, and it takes a whole team of studious marketers to understand it all. These studious marketers then present their information to that fat cat CEO, with that mighty bank account, to create a fashion line that brackets your snarl and appeals to that nonconformist ethos that we have to tell the world that we just don’t give a durn about nothing.

The 50’s and 60’s were a relatively homogenous era that built a fairly homogenous market. It was the Leave it to Beaver, Dragnet, Davy Crockett era. It was an era where fat cat CEOs dictated to the populous what was hip and fashionable. If they wanted everyone and their brother or sister to buy what they were selling, they had Marilyn Monroe and Marlon Brando wear it. They had The Beatles sponsor it, they had Milton Bearle smoke it, and it all gave birth to the ‘keeping up joneses’ meme. Marketing and commercialization have always dictated style of dress, home décor, and artistic tastes, but the power they had back then was considerably stronger before the late 60’s. The late 60’s were a time of nonconformist sophistication that brought forth some degree of individualism, at least when it came to clothing and music, but the markets didn’t sit around and lick their wounds over the power they lost. They adapted. The nonconformity market was born. It was a submarket that up and coming, risk-takers, otherwise known as entrepreneurs, adapted to, and they left the conformists in the dust, until the nonconformist consumers adapted and bucked the current nonconformist trends, and the market adapted again and again, until they started appealing to the nonconformist goth with a snarl. These sub markets were all created to appeal to those that marketing and commercialization didn’t. Up and coming, risk taking entrepreneurs saw dollar signs in tie dye shirts and bell bottom pants, and Ocean Pacific shirts, and Vans shoes, and on and on, until there was a market for every form of nonconformity a hip, nonconformist dude could think up. Our level of nonconformity is actually conformity in America today, and we are no more special than the nonconformists that we are laughing about here.

As David McRaney states in his book, You are Not so Smart: “Poor people compete with resources. The middle class competes with selection. The wealthy compete with possessions. You sold out long ago in one way or another. The specifics of who you sell to and how much you make – those are only details.”