“What’s black and white, and red all over?” was a joke I found on a Bazooka Joe wrapper. “A newspaper!” I repeated that joke a number of times. I went into the punchline with what I believed to be the perfect pitch, and I hit that punch line perfectly, but I had a little secret: I didn’t get it. I asked those in my inner circle –those that I believed would gracefully illuminate me without attaching the public ridicule I probably deserved– to explain it to me. They couldn’t. They didn’t get it either. One person told me that they thought the ink newspapers use comes from a red-base. It didn’t think that was funny, but I was relieved that I finally had something of a foothold on the joke. It wasn’t until years later that I finally realized that the joke involved the homophone spellings of red and read. Read, as in the in the past participle read, as in while a newspaper may have a white base, and black print, it is read all over, as opposed to the color red. If you got that joke right off the bat, congrats, but I assume that there has to be at least one joke that you retold that you didn’t get. The point is that we may actually laugh harder at jokes we don’t get than those we do, and that laughter may be an instinctual, fallback position to those things that confuse us.

How many of us asked a joke teller to explain a joke? We hate to do it, because we know it reveals us, and we hate to ruin another person’s joke by asking for an explanation, but some of the times, we need explanations. How many times has the explanation confused us more and led to more laughter? Were we using this laughter to cover for the fact that we didn’t get it, or were we –as Vonnegut suggests– laughing more in conjunction with our confusion? Has this progression ever led us to find a joke genuinely hilarious without ever understanding it in the first place?

The relative nature of humor is obvious to anyone that has attempted to crack a joke, but the extremes are noteworthy. There are some universal truths to comedy, but for the most part comedy may be our most subjective art form. Individual experiences lead us to finding relative humor in a subject, but it would be impossible for a comedic artist to try to relate to all of his audience members. Thus, it is incumbent on a qualified comedic artist to create funny.

Falling is funny. There is no confusion about that. Seeing Chevy Chase do what he did in the 70’s was a brand of humor he never had to explain. Stupid is funny. Abbot and Costello, John Ritter, and the Airplane/Naked Gun writers proved that by creating timeless humor with people falling and doing stupid things. Most comedians began their careers by falling, doing stupid things, and imitating famous people, but most of them realized, at some point, that they could only do those things for so long before they started to become a parody of themselves.

I was too young to see Richard Pryor’s gestation cycle in comedy. I didn’t know the middlebrow, Bill Cosby-like Richard Pryor. I only knew the racial and radical comedian that launched himself from the pack to the stratosphere of comedy, but that didn’t mean I understood his brand of humor. I didn’t understand George Carlin or Cheech and Chong either. Knowledge and experience have taught me that Carlin and Pryor are funny, but how did I arrive at that answer? I have to imagine that Pryor and Carlin struggled to reach audiences when they first attempted to stretch their comedy beyond the border. I have to imagine they experienced pratfalls on their road to the hip, cool, dangerous, and edgy titles that their work would eventually assume. There had to be an inclusive group that “got it” that everyone wanted in on. Those people then had to teach other people, until those other people taught my people, and my people taught me that I if I didn’t “get it” too I faced ostracizing.

Cheech and Chong followed Carlin and Pryor through the doors they opened. They introduced some of their own elements to the brand, but for the most part, they owed a deep debt of gratitude to Carlin and Pryor. I learned these comedians were funny by watching my friends and my friend’s parents watch them. I was young and impressionable. I wanted to be hip and cool, and I wanted to understand adult humor. I learned that this material was innovative, and a tour-de-force and I learned that if I wanted to be all that I was hoping to be in life, I would have to laugh to tears at the things Cheech and Chong did.

“Man, you have got to see Up in Smoke,” my friends would say, “That thing is hilarious.” I watched it. I didn’t get it, and I put a lot of effort into getting it, because I didn’t want to be that naïve, little kid that didn’t understand. Later, while watching it with friends, I made sure to laugh in all the right places. I still didn’t get it, but they didn’t have to know that. They didn’t have to know I wasn’t hip or cool. It was my little secret.

I learned that drugs and sex were funny. Cussing was even funny after a while, because cussing was naughty. I became an adult, I had my own individual adventures in life, and I eventually learned that cussing, sex and drugs were funny because they were naughty. Naughty is funny, but it is playground funny. It is base humor, and some are satisfied providing base humor, but an artistic comedian needs to make it situational.

Situational humor is the: “I can’t believe he did this while doing that?” brand of humor that we all have to learn in life if we want to be cool and hip. Sex is funny, especially if you do it wrong and you’re willing to be self-effacing about it in front of a group of people. Farting is funny no matter where it occurs. Most of our most embarrassing biological functions are funny, because we all do them, and we can all relate, but if you can mix in a dash of the “Doing that while doing this?” element to the story, you can achieve hilarity. Stories of drug abuse are funny, as long as the provocateur is not currently doing it. We’ve agreed that it’s sad if someone is currently chasing demons, but if they say they did it in the past “while doing that” the next thing they will have to do is hire a manager to handle their bookings.

The guy under the Darth Vader mask, David Prowse, once admitted that he did more cocaine during the filming of the Star Wars movies than there is snow on Hoth. That’s not great comedy, until you factor in that Darth Vader was a character kids adored, and that Prowse did cocaine while playing the character … that’s funny. Really? Why? Is it because Prowse pulled the ultimate naughty … doing drugs while doing that? If someone says a joke about a mean mama, and your mama was mean, the comedian can reach you on your level, but how many of us have snorted a line of coke, or injected heroin in our veins, and why do we laugh so hard about that? The current strain of “doing that while doing this” involves adult comedians cussing in front of children? We, apparently, love this taboo breaking practice in our movies, judging by the number of times they now do it comedies. We also love to see men make lustful jokes about other men. We love it when our comedies break taboos, but George Carlin once provided a warning about breaking taboos. He basically said that societal standards should always be respected and taboos should be carefully and gradually broken down, for once they’re all obliterated comedians will have nothing left to mock.

“If I fall down a manhole, that’s not funny. If you do, that’s funny,” Mel Brooks once said.

Jay Leno once mused that he didn’t understand why social, highbrow comedians felt a need to shake their audiences’ foundations and breakdown barriers. He said that he didn’t understand comedians bringing high-falootin’ sensibilities to their comedy. He said being a comedian is a wonderful profession that has two basic components: telling jokes and getting paid for it. “Well,” Larry David responded, “You (Leno) can think that, because you were good at it.” 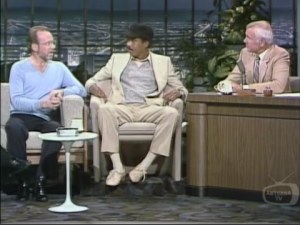 Bob Hope and Jack Benny told jokes and got paid in their day, but theirs were different jokes, safer jokes, that appealed to fathers and sons alike. Benny and Hope did not seek to break boundaries or expose the culture’s sensitive underbelly. There were no sensibilities brought to their brand of humor. One would think that they would probably have a lot of trouble breaking through the ranks today. Hope told some risky jokes about Raquel Welch and Loni Anderson, but they were never so bold that they would offend a parent. Benny’s self-effacing humor would land him gigs in Omaha and Des Moines, but if he wanted in the upper echelon, he probably would’ve have to do some border stretching today. The difference between a Bob Hope and a Sam Kinison, or an Andrew Dice Clay, shows that humor evolves and changes over time.

Richard Pryor started out wanting to be the next Bill Cosby, but he realized there were limits to that, so he carved a niche out for himself. His primary goal was to tell jokes and get paid, but there came a point in his career where he realized that ultimate success could not be achieved through those traditional avenues. George Carlin was also one who could’ve stayed safe doing zany weathermen, but he realized there was other territory out there for him to mine. Jim Carrey was a master impersonator, but he saw an end game to it, so he reinvented himself and his comedy. Andy Kaufman could’ve never made the stage with traditional comedy sets, so he decided not to be funny, and he hoped that we would laugh instinctively at the confusion he created.

These comedians, and others, have broken down barriers in our society. They’ve shaken our sensibilities and made us laugh at ourselves, and they’ve shaped our politics, our views on religion and music, how we treat our children, what we think of our parents, how we define our sexual mores, and if we were going to have a puritanical or a more permissive society. One could say that the power comedians wield in our society dates back to court jesters and beyond. Yet, even those court jesters had a pecking order that divided the talented from the untalented. We can assume that some of those jesters were so talented that they could tell a joke and get paid. Others recognized that they weren’t as talented, and they needed to carve out a niche for the untalented that didn’t rely on imitating and falling, and they most likely had to teach the king a new brand of comedy that relied on the natural human instinct to laugh when confused.