Are you inconsiderate?  How inconsiderate are you?  Are you one that is momentarily inconsiderate, or do you have bad habits?  When you’re at a grocery store, and you need a moment to discuss the needs of your household with your significant other, do the two of you wallow in the middle of aisle during this discussion, or do you create a pathway for any possible oncoming shoppers?  How considerate are you?  Are you one that waits until the need for a pathway arises, or do you prepare for this eventuality beforehand?  How many people have to say, ‘excuse me’ to get by you?  Are there moments where this has happened, or is it an event that occurs whenever you’re at a grocery store?

Whenever a discussion of ethics arises on TV, or in literature, the audience is usually subjected to larger questions.  How concerned are Americans with the world at large, are Euros so self-righteous that they think they’re better than most other countrymen, and what of the societal ethics regarding cell phones?  Are Americans becoming more inconsiderate on the street, in their cars, or in their every day life?  These discussions are all very macro, and as such less interesting to me.  I think we can get a better gauge of humanity, and their ethics, in the seemingly inconsequential manner in which we conduct ourselves in a grocery store.

When we’re at work, or church, we’re usually on our best behavior with the fear that the boss might see us at our worst.  When we’re in bars, or sporting events, our behavior is usually altered to some degree, but when we’re at a grocery store, we are who we are, and the interactions we have with strangers define us. 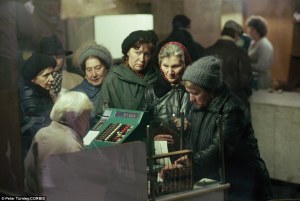 The grocery store can be a breeding ground for selfishness and self-involvement, in that the only reason we go there is to satisfy our personal needs.  It does require some effort, therefore, to avoid focusing too much on ourselves, and to remain considerate of those around us.

We’re all going to have moments in supermarkets, just like in life, where we slip up and become inconsiderate.  When you’re discussing the benefits of beef broth and mushroom soup to your next meal, you and your significant other can get so caught up in that discussion that you momentarily lose track of the world around you.  Some of the times, the two of you have to be shaken out of that world by a fellow consumer trying to get by, and if this happens to the considerate they are embarrassed by the momentary slip up, and they quickly move to rectify it with apologies.

There are others, and we all know them, that seem to be born inconsiderate.  It’s a way of life for these people, as opposed to a momentary slip up.  They’re the ones that walk gingerly through cross walks, ignore a person that’s speaking, and place their cart in the middle of an aisle while reaching for the peas.  These people can be immersed in the broth/soup conversation, be jerked out of the conversation by a passerby, and continue that conversation while apathetically moving their cart aside ever so s-l-o-w-l-y.

Even these annoyingly ambivalent and methodical shoppers can be redeemed, however, if they know the regimented process involved in the checkout aisle. We also understand that some discussion is necessary when two people are making choices for a household, but that doesn’t mean that we are any less frustrated with you.  It can all be forgiven, however, when you have made all of your selections, and your focus is acute in the checkout.

Anyone that has achieved the age of—to be generous—thirty, knows that there is an order to the manner in which a customer moves through the checkout aisle.  Some of us have watched our elders and learned of the considerate order, that allows the consumer to make his stay in the checkout aisle a smooth, orderly, and quick transaction.  This order is very regimented, to the progressions you physically make through the aisle, and onto the manner in which you prepare to pay.  Those of us that have paid attention to our elders, and all the precedents we have witnessed with other customers, know this order.  We may not expect every customer to follow this order down to the regimented progressions through the aisle, but when we see an example of the opposite, we grow impatient and frustrated with their inability to follow the codes and standards of our society.

To paraphrase Ice Cube’s line in Boyz in the Hood: “Either they don’t know, don’t show, or don’t care about the standards of the grocery store checkout aisle.”

How prepared are you for the total, when that cashier calls it out?  If you’re writing a check, how much of it is written out before the total is given to you?  Do you have your billfold in hand, if you’re paying cash, or are you one that waits until the total is called out?  If you’re one of the latter, what did you think was going to happen?  Did you not consider the fact that you would have to eventually pay, or were you simply not thinking?

I find cash to be the most considerate method of payment available to those waiting behind you, and I usually have a hand in the billfold ready for the total to be called out.  I’m also, usually, within one to two dollars of the total. About the only inconvenience experienced by those behind me is the change thing.  If I have an opportunity to get rid of some change, I will always do so.  Some of the times, I will count my change beforehand, to know how much I have versus how much I may need, but most of the times, I am (unfortunately) totally caught off guard by the fact that I can dispense with some change in this transaction, and I will fish around in my pocket for any change that I have.  It’s a minimal inconsideration, but I still have to put a checkmark by this if I’m going to be honest and objective on my consideration list.

I have little to no problem with you debit card people, as long as you know the process well enough to know which buttons you will be required to punch through without too much pausing, or too much instruction from the cashier.  Most debit card people are caught off guard by the “change” question at the end of the debit card machine’s algorithm, and I’ve thought more than once that we might all be better off if this question were placed at the beginning of the algorithm, so that people are more practiced in that part of the process.

Other than my personal problems, involving dispensing with change, my progressions through the checkout aisle are honed and polished.  My conveyor belt progressions are impeccable.  For, not only do I push the items as far forward on the conveyor belt as possible, but once the checker has reached the halfway point in my number of items, I am halfway through the aisle.  This halfway point places me in a perfect position to reach any items that the cashier might not be able to reach, and it makes me available for questions that she may have.  At the point when she only has a few items left, I am at the little check writing outcropping, with cash in hand.  This allows the person behind me to move forward so that they can push their items as far forward as possible, and prepare for their checkout.

Those of us that have studied the protocol, and understand it well, want no praise for our actions.  We do not do it for the glory.  We understand that as others drift through life, on the lookout only for the inconsiderate, they will accidentally ignore those of us that follow the procedure. If those same people watched us, and learned from us, and copied our procedures, we would consider it the greatest of all compliments, and we believe that it could leave a trail of ease for the rest of humanity that move through the checkout aisle.

We’re all going to experience some problems in the checkout aisle.  Some of the times, we’re going to have to have a price check, and some of the times the verdict on those price checks are not going to go our way, and we will have to put some items back, and some of the times we’re going to have coupons that slow the proceedings, and some of the times the unexpected will arise that causes a severe delay in the lives of those behind us.  Some of the times, all we need to do is apologize, and all will be forgiven. It may not mean much to those of us that have already reached a pique of frustration with humanity, as it usually does nothing than add an exclamation mark to the swear words we have in our head for them.  We will accept their apology, however, and move on, knowing that that person has done their best to be considerate, and they have thus eased the suffering that I think they should be experiencing for their malfeasance.