“The reason we struggle with insecurity,” notes Pastor Steven Furtick, “is because we compare our behind-the-scenes with everyone else’s highlight reel.”

Some quotes educate us on matters we know nothing about, but the ones that stick take a matter we know everything about and puts a clever twist on it that changes our perspective. We all know failure, or some level of it, at various points of our life. Some of those failures have shaped us in profound ways that we assume everyone remembers them the moment we enter a room, and some people will, but will they remember their own, or will they compare our failings to their highlight reels.

“Acknowledging failure,” Megan McArdles writes in the book The Up Side of Down: Why Failing Well is the Key to Success, “Is a necessary first step in learning from it.”

Some of us are old enough to remember the severe penalty for missing a rung on the monkey bars. An erroneous grab, at the very least, could land a victim center-of-attention status, as we attempted to find our feet. At worst, it would cause the pack of onlookers to send an emissary to the office with a call for assistance. These everyone-is-looking-at-you moments are so immersed in embarrassment, and pain, that few can see any benefit to them.

Most of those liable for such situations, have lowered the monkey bars, and made the ground so forgivable that one would have to fall from a skyscraper to receive any pain. Thanks to these and other technological advances, fewer children get hurt on playgrounds, fewer playground manufacturers get sued, and everyone is much happier. There is one casualty, however, the pain of failure.

No one wants to see a child cry, and we should do everything we can to prevent it, but pain teaches us.

After a near fall in a supermarket, the checker complimented me on the agility and nimbleness I displayed to avoid hitting the ground. “It could be that,” I returned, “or it could be said that only someone so well-practiced in the art of falling knows how to avoid it.”

I eventually did touch ground a short time later, at a family reunion. I also touched a parked car, and then I touched the ground again. Among the lessons I learned is that pain hurts. Had it been a simple fall, it would be hardly worth noting. This was one of those by-the-time-this-ends type of falls everyone will be looking, some will be concerned, and most will be laughing. I thought I corrected my trajectory a number of times, but I was moving too fast. By the time it was finally over, I silenced just about everyone in the vicinity. The kids around me laughed, as kids will do when anyone falls, and my age-denying (Not Defying!) brother laughed, but if the Greg Giraldo line, “You know you’re getting old when you fall down, no one laughs and random strangers come running over acting all concerned,” is true, then I am getting old.

Most lessons in life are learned the hard way, and they are often learned in isolation, in that even our closest friends and family members distance themselves from us in these moments, so that they have no association with them. These dissociations range from laughter to sympathy, but the latter can be just as dissociative as the former if it’s done a right. The point is, no matter how we deal with these moments of failure, we usually end up having to deal with them alone.

The point is that the lessons learned through pain and embarrassment, are lessened by lowering the monkey bars, providing a forgiving ground, and instituting zero tolerance bully campaigns. The point is that those of us that see little-to-no benefit derived from bullying, or that any benefits are inconsequential when compared to the damage done by the bully may eventually see the fact that few lessons in life are learned by the individual, until those kids enter adult arenas.

A quote like Pastor Steven Furtick’s, also tells us the obvious fact that we’re not alone in having moments of failure, but that those that can deal with them in the proper perspective might actually be able to use them to succeed on some levels.

Any individual that attempts to create some form of art knows more about comparing another’s “highlight reels” to their “behind-the-scenes” efforts better than most. 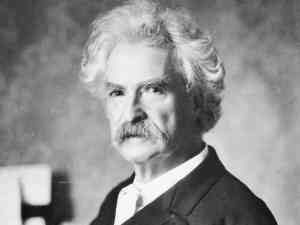 “Most of what Mark Twain wrote was dreck,” writes Kyle Smith.{1}

Most of us know Tom Sawyer and Huckleberry Finn, the highlight reels of Mark Twain’s writing. We know the infamous Twain quotes that occurred in the numerous speeches he gave, and the essays that he wrote, but it is believed that he wrote as many as 50,000 letters, 3,000 to 4,000 newspaper and magazine articles, and hundreds of thousands of words that were never published. Twain also wrote hundreds of literary manuscripts—books, stories, and essays—that he published, and then abandoned, or gave away. Almost all of it has been discovered over the last century, and placed in a home called The Mark Twain Papers.{2}

Very few of us are so interested in Mark Twain, or any of his writing, that we want to read his “dreck”. Very few of us are so fanatical about Twain that we want to know the material he, and his publishers, deemed unpublishable. Yet that “dreck” ended up fertilizing the foundation of his thought process so well that he churned out two highlight reels that many agree to be historic in nature. Similarly, very few would want to want to watch a Michael Jordan, or a Deion Sanders, practice through the years to tweak, and foster their athletic talent to a point that we now have numerous three to four second highlight reels of their athletic prowess. Their behind-the-scenes struggles may provide some interesting insight into their process, but they’ve become a footnote at the bottom of the page of their story that no one wants to endure in total.

On an album prior to Nirvana’s Nevermind, called Bleach, Kurt Cobain penned a song called Floyd the Barber. “Where does the kernel of a song like that start?” Soundgarden’s Chris Cornell asked. Cornell may not have come from the exact same background as Cobain, and he may not have been influenced by the exact same artists as Cobain, but he presumably felt like his creative process was so close to Cobain’s that he couldn’t fathom how the man achieved such divergence from the norms of musical creation. Those familiar with Cobain’s story also know that he was heavily influenced by the music of Soundgarden, and that fact probably confused Cornell all the more.

Other than Soundgarden, Cobain also loved Queen, The Beatles, The Pixies, The Melvins, and a number of other lesser known bands. How much of his early works were so similar to those artists that no one took him seriously? As I wrote earlier, it’s a major part of the artistic process that every artist goes through to attempt to duplicate influential artists in some manner. It’s a step in the process of crafting original works. When that artist duplicates those that came before them often enough, the artist (almost accidentally) begins to branch off into building something different … if they have any talent for creation in the first place.

Divergence in the artistic process

Few artists can pinpoint that exact moment when they were finally been able to break the shackles of their influences, for it happens so progressively that it’s almost impossible to pinpoint. Most artists do remember that moment when that one, somewhat inconsequential person said that some aspect of their piece wasn’t half bad however. At that point, the artist becomes obsessed to duplicate, or replicate, that nugget of an idea. Once that nugget is added to another nugget, those nuggets become a bold idea that wasn’t half bad. Once that is achieved, another bold idea is added, until it all equals a “halfway decent” compendium of ideas that may form something good. At that point, the artist believes he has something that others may consider unique enough to be called an artistic creation in its own right. When enough unique, artistic creations are complete, the artist may eventually achieve their own highlight reels.

When did Cobain finally begin to branch off? How did he become divergent, and creative, and different on a level that made him an organic writer to be reckoned with? How many casual statements, spray paintings on walls, and other assorted personal experiences had to occur before Kurt Cobain had the lyrics for Nevermind? How many different guitar structures did Cobain and company work through, until he arrived at something usable? How many Nevermind lifted music or lyrics from other failed songs, casual strummings in a closet, and offshoots of other guitarists? What did Floyd the Barber, Come as You Are, and Pennyroyal Tea sound like in those moments when they first found their way from notepad to basement practice sessions? How many transformations did these songs go through in those practice sessions, until they were entirely original, and transformative, and legendary additions to the albums they were included on? If Cobain were alive to answer the question, would he acknowledge that Nevermind is a 1% highlight reel of about a decade of work? Most of us don’t care, we only want to hear the highlight reels, so we have something to tap our finger to on the ride home from work.

Cobain’s highlight reel, Nevermind, proved to be so popular that record execs, and fans, called for a B-list, in the form of the album Incesticide. That album proved Cobain’s B-list was better than most people’s A-list, but what about the D-list, and E-list songs that proved to be so embarrassing that no one outside his inner circle ever knew they existed?

The point is that some of us are so influenced by an artist’s highlight reels that we want to replicate it, and duplicate it, until we become equally as famous as a result, and when we don’t, we think that there is something wrong with us. The point is that the difference between a Mark Twain, a Hemingway, a Cobain, and those that compare their behind-the-scenes work to an influential artist’s highlight reels is that while these artists recognized that most of what they did was “dreck”, they also knew that their behind-the-scenes struggles could be used as fertilizer to feed some flowers.

So, the next time you sit behind behind-the-scenes of your computer keyboard, tattered spiral notebook, or whatever your blank canvas is, remember that all of those geniuses —who so inspired you to be doing what you are doing right now— probably spent as many hours as you do staring at a blank page, or a blinking cursor, trying to weed through all the “dreck”, that every artist creates, to create something different, something divergent from all those creations that inspired them to create. You now know that they succeeded in that plight, but you only know that because the only thing you want to see, hear, and read are their highlight reels.