“Looking for love in all the wrong places can be dramatic, exciting, and fun,” nobody said. Nobody says this, but a number of us have a number of ten minutes to midnight relationships, and while some consider come of them exciting and fun, they know they aren’t built to last. The music stops at midnight, as we all know, and the curtain closes on our carefully crafted production. We take our costumes and makeup off and prepare them for the big reveal. 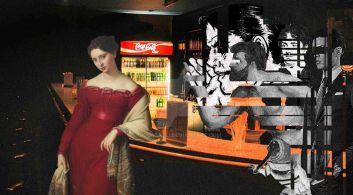 The fairy tale romance is out there, and we know it. We’ve read about it, we’ve seen it in the movies, on TV, and we’ve heard about in rock and roll songs. We’ve heard about the turmoil and tumult that occurs in some relationships … in country music songs, but who wants to live like that? We shouldn’t have to settle. We might be embarrassed to admit that lust just doesn’t do it for us anymore, and we’re done trying to play a role in Gone with the Wind. We lick our wounds, we help them lick theirs, and we set about building our Frankenstein’s monster. We want someone funny, but not mean; somewhat skinny but not lean; dramatic but not traumatic; and nice but not sappy. We search far and wide, until we find that person who wants to get to know us while quietly watching reruns of the Andy Griffith Show and Three’s Company with us, eating a turkey sandwich and a bag of Lay’s original brand of potato chips.

When those after-the-show conversations casually morph into mundane conversation, we realize that some date-worthy people are normal, and they don’t mind listening to what we have to say. They also appear to be doing so with genuine interest. Our friends might not want to hear about the nights we spend with them, discussing the unheralded comedic genius Don Knotts, and they might even remind us how exciting and sexy our exes were.

We enjoyed those relationships for what they were, but they always find a way to transfer their toxic, emotional baggage to us. They affect and infect everyone in their wake, until the dating pool becomes an emotional, as opposed to physical, manifestation of the Cantina Bar scene in Star Wars. In our search for the perfect mate, we uncovered a precious commodity we never considered before normalcy. We never put the normal bullet point in our search engine, because we spent so much time condemning the normal. “Who wants to be normal? Normal is boring, and my parents were normal, and I’m anything and everything but,” we said various strains of this joke so often that we began to believe it. After all of the whirlwind romances leave us in an undefined state, somewhere near unstable, we begin to prize normal people. We seek someone who can yin our yang that might lead to a stable foundation that we can use to build something year by year, day by day, and hour to hour. We realize that the best romance is a “Little bit country and a little bit rock and roll.”

Elijah Wood and Tobie McGuire are two different people. I knew this on some level, but when I searched for a movie I just finished, to recommend it to a friend, I searched for Tobie McGuire. It turned out Elijah Wood read the screenwriter’s lines for the character of that movie. I used to know my cultural touchstones so well. Am I slipping? Who cares? We do. Knowing cultural references is important to us, and in many ways we think it defines our intelligence. As I’ve written elsewhere, in Abraham Lincoln’s day, it was vital to a person’s existence that they know The Bible and Shakespeare so well that you could drop and spot all references; in the 1990’s, it was The Simpsons and Seinfeld; and now with devices and streaming, the cultural touchstones are all over the map. There are still some cultural references everyone must know, however, and if a foreigner wants to assimilate into the American culture, they would do well to learn some of our cultural references. I slipped in one of mine, and I told a friend about this. She said, “That’s great, but I don’t know who either of those people are.” As someone who knows cultural references but doesn’t care too much about them, this placed me at a fork in the road. I used to care a great deal, and I once met a person who was as knowledgeable as I was in cultural references. She even topped me in several areas, a novelty I enjoyed. I had a crush on her, based almost solely on this area of her expertise. Our relationship didn’t last long however as she personified, for me, the idea that when selecting a mate in life, cultural knowledge might be on the tail end of the top 100 most important pieces of the pie in my decision making process.

It was all quite frustrating at the time, but I now think my dad was probably, accidentally or incidentally, onto something. I now add to my dad’s emotionally callous response, “While you’re over there, in the corner, remember that it’s up to you to teach the world how they can help you avoid such messy displays of emotion. If you’re so mad that you’re now ready to tip the apple cart, ask yourself why you didn’t do, or say, something sooner. If you’re raging mad now, chances are you’re probably mad at yourself for your inability to do, or say, something sooner, when this was nothing more than a simple disagreement. We were all rational back then, and we probably would’ve listened to your solutions. Shoot that stuff at the source, and you might not ever have to be so mad again. If you’re mad at something someone said, or did, it’s your job to tell them about it.”

“But, they won’t listen to me,” the collective ‘we’ respond.

“Yeah, you’re probably going to have to do it a lot, and you might have to do it so often that it could lead to some form of confrontation or some sort of altercation, but if you don’t, you’re going to end up like Michael.”

Some twenty years prior to the day I met Michael, bullies were laying into him. The bullies were so relentless that whatever they did to Michael affected him twenty years later, when he told his story to a group of people who never met him before. These bullies picked on Michael so often, in his high school years, that he sought the assistance from an authority figure. That authority figure offered some advice that few authority figures would today. “Pick out the toughest one of the bunch and punch him in the mouth as hard as you can,” the priest, in charge of discipline at the high school we went to in different years, said. “He’s going to punch you back, and you’ll probably get beat up, but they will all leave you alone from that point on.”

“What did you do?” I asked after a pregnant pause.

“I didn’t do anything,” Michael said. “I couldn’t believe that a priest was telling me to punch someone.”

That was the end of Michael’s story as far as Michael was concerned. For those of us who never met Michael before, it was only the beginning of our understanding of him. If Michael found a forceful way to rebuke those bullies, his life from that day forward might be different. If Michael reached a point of desperation that required him to punch the biggest bully of the bunch, and he did it, he was probably a different man from the one we met that day. As the priest said, the big bully would’ve punched him back, and it would’ve hurt. Worst-case scenario, Michael ends up in a hospital, but most bullies simply punch back one time and leave their victim on the floor. Worst-case scenario, Michael ends up in the hospital, and he has to get his jaw wired shut, but Michael walks out of that emergency room a man who believes he knows how to handle his own situations. He doesn’t have to rely on the relative ineptitude of authority figures. He can handle himself, and he’s his own man, as opposed to the man we knew some twenty years who stepped away from his fork in the road.

As the years rolled along, in our working relationship, we learned that Michael was a seething ball of hatred. He hated certain people, until they came around. He said the meanest, most awful things about them, but when they stepped near him, he didn’t know how to express himself. Most of us have issues with confrontation, but most of us find a healthy, non-confrontational way of voicing our concerns. Michael didn’t even have that, and when I witnessed it firsthand, I wondered how different he might be if he followed that priest’s advice. It’s possible that Michael’s meek nature was a result of so many instances that one such instance wouldn’t make a dent in his approach, but it might have started the ball rolling.

It’s our job in life to teach others how to treat us. We might have to do it so often that they mock us for repeating ourselves, but we can add, “If you knew how I wanted to be treated, and you did it anyway, why do you continue to do it? What did you hope to gain?” We might have to repeat ourselves with such force that it results in what everyone fears most a punch in the mouth, but what’s the alternative? Where our we now? We’re so mad now that they’re under our skin. If people treat us poorly, we should recognize that as our inability to instruct them properly. Telling everyone that we’re mad, or giving them the silent treatment, is a complete waste of everyone’s time, including ours.”

We didn’t enter into this argument with Michael. We simply felt sorry for him, but what if we had? We can imagine that Michael would’ve been able to counterpoint our every point. We would’ve argued, and he had twenty years of justifications for his actions. At what point in an argument, do we realize we’re doing more harm than good? At what point do we reach a zero point? We argue because we want everyone to know how smart we are. We argue because we want to persuade others to our point of view. We also argue to save our friends from themselves. At what point, do we realize the other party disagrees with us so much that no matter what we say, we’re never going to persuade them to our point of view? At what point do we realize there’s no point in continuing? Even when they’re demonstrably wrong, it makes no sense to continue the argument, as we can see that they’re not going to change their mind. We can also see that we’re insulting them at some point, and we might be damaging whatever relationship we have with them. As much as it pains us, we realize that some of the times it’s just better, less frustrating, and less maddening, to walk away.