It’s been 50 years since the most seminal era of music. That’s a long time to remember, forget, and strategically distort some facts. I found that out as I started writing this article in my head, staring at the ceiling, unable to sleep. I am unable to sleep if I have a thought, any stray thought I can think up to keep sleep at bay for one more minute or hour as the case may be. This particular article haunted me, as I thought it was so good that I couldn’t, wouldn’t, or shouldn’t sleep, until it was done. It’s sort of a small, obsessive, and to my mind incurable, mental illness.

(Now that I’m done with this article, and editing it, it’s not as great as I thought it would be, but read on.) 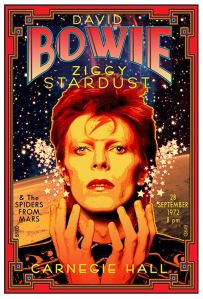 My original inspiration involved what I considered could be an award-winning title: 1972: The Magical Music Year. My inspiration involved telling you, my faithful reader, how many of our most beloved musical artists started in 1972, how many of the most influential bands of all time came out with their seminal works in 1972, and what an incredible year it was for the music industry. I was all ready to write about all of artists and bands from 1972 that would shape the music industry for decades, and in some small ways the world, for decades (50 year!) to come. I was ready to follow each entry with the words, “such and such did this in 1972 to further cement the notion that 1972 was, indeed, a magical year”, and I planned to write that line so often that the reader would grow sick of it. I found out I was wrong, somewhat, sort of. I found out that in some ways, and by some days, I was a little off. Instead of titling this piece 1972: The Magical Music Year, I edited the title to Circa 1972. The theme remains, but the word circa (approximately) gives me a three-year window, either way, to talk about one of the most incredible eras (as opposed to years) in music, and I also decided to continue writing this piece because I didn’t want to waste a night’s sleep for nothing.

22) Most of the folksy, Jim Croce music has not aged well, and he probably doesn’t make many “best of” lists, but my mom forced me to grow up listening to his tunes, and his 1972 You don’t Mess Around with Jim was one of the first albums, not created by Johnny Cash, that I heard top to bottom so often that it’s earned a place on this list. I heard it at my aunt’s house, when she wasn’t playing Johnny Cash, and I was heard it in my neighbors’ homes when they couldn’t find their Johnny Cash albums. As a result, I hated Croce (and Cash) for so many years, but when I hear this album now, I experience some nostalgia, remembering those years when I was so young that I had no control of the music they played in my vicinity.

21) As often as I was wrong about 1972, I was also right on the mark for some artists. Stevie Wonder, for example, wrote and released one of his many incredible albums in 1972, Talking Book.

20) Michael Jackson’s solo debut Got to Be There was released in 1972. This might not be his best album, but I don’t think anyone would argue that it kicked off an incredibly influential solo career.

st argue their best Machine Headcame out in 1972.

18) Steely Dan’s debut Can’t Buy a Thrill was released in 1972, and two of their other more influential albums, Countdown to Ecstasy (1973) and Pretzel Logic (1974), were released during our arbitrary window.

17) Roxy Music’s debut was released in 1972. They also released four more of their best albums in this arbitrary window. All five of these albums contain singles that have made their way to various playlists I’ve created for decades.

16) Todd Rungren’s weirdest and most creative album, A Wizard/ATrue Star, was created in 1972, as was his most popular album Something/Anything. As with most artists on this list, Rungren’s pre and post 1972 career is hit and miss, but I consider Wizard/A True Star his masterpiece.

15) Lou Reed put out his debut album, and the career defining album that David Bowie deserved a major assist on, Transformer in 1972.

14) Elton John and Bernie Taupin put together what Allmusic.com calls one of the most focused and accomplished set of songs they ever wrote in 1972, Honky Chateau.

13) I thought I heard somewhere that Billy Joel’s Piano Man came out in 1972, but it was 1973. His debut album came out in 1971, so to cement my conspiracy theory, Mr. Joel just happened to take 1972 off to make it seem like I wasted a night of insomnia for nothing. Are we supposed to believe that it just happened to happen that way? Are we supposed to believe that they didn’t get together to make me look foolish? I’ll leave that up to you.

12) The Rolling Stones did not start in 1972, of course, and some would argue that it wasn’t the beginning of their artistic peak, but the end. The Stones did put out an album in 1972 that many consider their best, and some consider one of the best albums ever made Exile on Main Street. The Stones would release better singles than anything on Exile on Main Street, in my opinion, but they never delivered a better album, top to bottom, than Exile. Sticky Fingersalso came out in 1971.

11) Queen loosely formed in 1970, John Deacon joined in 1971, and they recorded their debut album in 1973, but they wouldn’t reach their artistic peak until 1975 with their A Night at the Opera album.

10) KISS started in 1973, and they recorded their debut album in 1974, but they wouldn’t achieve worldwide stardom until the release of their Alive album in 1975.

9) Rush would form in 1968, but they were far from ready. They would experience lineup changes and several configurations before they became the band we know today. (Sidenote: I had no idea, until I began researching this piece that Alex Lifeson was the only remaining member from the original lineup. If I ever put any thought into it, I would’ve thought Lee or Peart was.) They didn’t release their debut album for six long years later in 1974, and they released Fly by Night in 1975.

8) Some of us argue that 1972 was the apex of Frank Zappa’s mainstream creativity, but Apostrophe (1974) and Over-Nite Sensation (1973) weren’t released for a couple years after that seminal year. 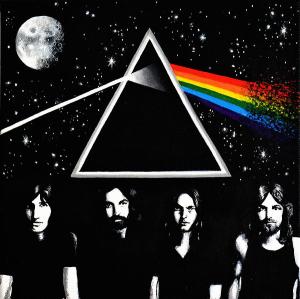 7) One of the greatest albums of all time, Pink Floyd’s Dark Side of the Moon, wasn’t released until March of 1973, but we can guess that the heart of this album was created in 1972, and most of the touch up, superficial tinkering work done on the album occurred in 1973. (I’m trying to keep a theme going here.)

5) Likewise, Paul McCartney didn’t form Wings in 1971, and Band on the Run didn’t come out until December 1973. Due to the fact that McCartney normally writes so quickly, and so often, I suspect that he wrote Wing’s debut Wild Life in 1971, and he skipped 1972 before delivering Band on the Run just to mess with my theme here, and don’t tell me he couldn’t know I’d be writing this article 50 years later. He knew!

3) Led Zeppelin released their best album, IMHO, Physical Graffiti in 1974. The three-year window also includes Led Zeppelin IV (1971) and Houses of the Holy (1973). Notice the pattern of skipping 1972? You think that’s a coincidence? 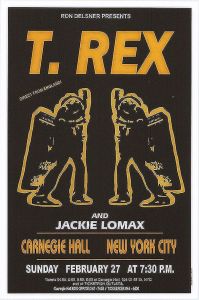 2) T. Rex’s most incredible album Electric Warrior was released in September of 1971, but the single from the album didn’t begin to chart until January of 1972. Marc Bolan’s second-best, stellar album Slider was released in ’72.

1) And last but not least, we direct you to the reason I wrote this article in the first place, as I introduce you to a man that I consider one of greatest, most influential, prolific, and creative artists of all time. In 1972, David Bowie experienced what could be his most popular year, a year in which he produced what may not be his best record, but the one that had the most cultural impact. Before and after 1972, Mr. David Bowie created incredible music, but IMHO, he blew the damned doors open with his 1972 release Ziggy Stardust and the Spiders from Mars.

If you’re looking for a starting point on the otherwise daunting musical catalogue of one of music’s greatest artists, I can think of no album that initiates the uninitiated better than Ziggy.

We all go through phases with artists, songs, and albums, but I don’t think I listened to any album on this 1972 list more than Ziggy. In 1972, as the character Ziggy, David Bowie sat atop the world.

The album wasn’t adored by critics or fans at the time of its release (though it did peak at #5 in the U.K.), but after Bowie killed the rock star, he posthumously received accolades as Bowie’s breakthrough character, and one of the most important rock albums of all time. 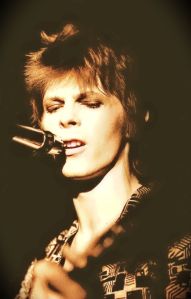 I’m quite sure you just thought of about five-to-ten artists and albums I left out, but this is a list of artists who influenced my life the most, and though I was too young to listen to the music of 1972, when it came out, and I had no say in what music was played on record players and eight-track decks, I would eventually come to adore the music I thought they created in 1972.

Before reading on, go back and look at the list of emboldened names. Look at the names of the artists who either debuted between 1972 and 1975, or look at the albums these incredible artists created circa ‘72-’75 window. What kind of soup were they eating? What did they have in their water? If there was some sort of toxic substance with a byproduct of greater creativity, they probably would‘ve suffered long-term effects, but as far as we know they didn‘t, so how did this happen?

Most of the artists of this era talk about one seminal moment, The Beatles appearance on The Ed Sullivan Show. Others talk about the other The Beatles albums that followed to inspire them to want to create a little magic of their own. Some also suggest that The Rolling Stones, Elvis, The Who, and Black Sabbath played seminal roles to influence their music careers. Whomever it was that inspired these guys, a window opened, circa 1972, for so many artists to take that influence to a different level that displayed a level of unique brilliance of their own. We can guess that some of them went to their mom’s garage, or whatever space they could find, and they started something that took years to develop after seeing The Beatles for the first time.

The artists on this list then created something that inspired those who followed to create their own influence. How many different algorithms can we create from the list of artists above who took their influence to another, completely different level? It‘s incredible to think how influential this small window in time was, and how it changed the musical landscape forever. It’s a window in time that I don’t think will ever recreate, duplicate, or defeat for sheer output, creativity, and intellectual brilliance. No matter how you square it, this year, and these three years, were some of the greatest, most creative three years in rock history.