Everyone’s definition of weird is relative and evolving with time, but the Idiots in Jeff Garland’s Dealin with Idiots appear too weird, at times.  At times, they appear Hollywood weird, funny weird, and weird for the sake of being weird.  These Idiots don’t display the same urgent need to be normal that appears almost indigenous to extremely weird people, and they don’t go overboard trying to convince Garland that they’re normal either.  They don’t try to hide their abnormalities, in other words, and they don’t appear sensitive about them when they’re on display.  The Idiots are funny, and fun, but they just don’t appear organically weird. 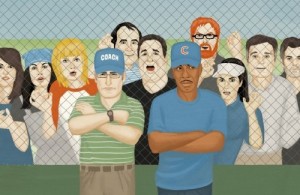 One has to have some sympathy for Garland, and any involved in the process of making movies, for the constraints they have in their art form.  We demand that most movies hurry up and get to the funny, and we do not allow them the same amount of space for characterization that is allotted, say, authors.  In depth characterization, of the type I’m calling for, usually ends up on the cutting room floor when a movie is being edited for time constraints, so one has to excuse Jeff Garland’s Dealin’ with Idiots for having his Idiots get too weird too quickly.

Weird has come a long way in Hollywood.  It started out in black and white with a crazy woman muttering softly to herself, until she progressed to a stage modern movie goers would most closely associate with demonic possession.  This crazy lady’s leading man would see this descent, put a cloth on her forehead, and tell her that she needed rest.  Weird then progressed in Hollywood to the lip trilling depiction put forth most famously in the 70’s movie One Flew Over the Cuckoo’s Nest.  Garland’s version of weird matches the modern, and less judgmental, version of weird that is a lot more organic, but it’s still the screen tested, Hollywood-approved weird.

That’s mistake number one, as I see it.  You don’t tell people your documenting them in anyway for fear of having them get noteworthy.  They’ll start acting less candid, different, and quirky in a manner that has nothing to do with their personality, because their personality is not weird to them.  It’s funny to watch people act like idiots, but to get to that vaunted, hilarious level one needs to get more authentic and more organic.  It’s difficult, of couse, with all of the constraints on movie makers, but it has been done.

Once they start in on their rants, your job, as a writer, is to simply take a step back and act as a stenographer, recording everything they do or say from that point forward.  You may want to agree with them, to show them that they have an ally, but be careful.  If you agree too much, you’ll diffuse their sense of righteous indignation, and you’ll cost yourself a treasure trove of material.  The weird person may even turn on you, without any sense of objectivity, and tell you that you’re crazy.

Weird people do not have a club, or clique.  They’ll eat their own.  They’ll take every opportunity they can find to point out the weird to you.  They’ll ask you to join them in mocking the weird.  They’ll tell stories about them.  They’ll hope that each instance they point out provides them the distance necessary to land in the center with you, witnessing all of the weird people of life.  If you are able to convince them that you’re one of them, they’ll tell you everything that you want to know about the weird.   You walk a tightrope when attempting to extract the weird, and the best method I’ve found, to get the best material possible, is to simply play the role of active listener.  You don’t get there, in my experience, by telling them to you’re writing a piece about them, because that will prompt them to start acting weird… screen tested, Hollywood-approved weird.

If you do get there, you’ll realize that most weird people don’t know that they’re weird.  Most weird people don’t think weird thoughts, or act in a weird manner, unless those acts and thoughts are screen tested, Hollywood-approved weird.  You may think that they’re a weird person, but who do you think you are?  Why just last week, you said, or did, something weird.  You’re one of them, not one of us, they’ll say, and that’s why we like you.

Few would contest the notion that movies have gotten weirder in the last couple decades,  but a question that a weird movie maker might ask is “are we weirder”?  Do movies reflect this change in our culture, or has it played an instrumental role in its change?  Being different, or weird, used to be anathema in the culture, if artistic interpretations in movies are to be used as a barometer.  Black and white people did anything they could to avoid being associated with such terms.  Modern culture has it, now, that being different carries with it some virtue.  Normal is boring, they say, and  your parents are normal, and look how they turned out, but have these ideas been reflected in movies, or refracted by movies?  Those that think that movies bear the brunt of these cultural changes dismiss the fact that all movies are screen tested, and a movie does not pass these screen tests if they’re judged to be so odd, weird, or out of the norm that people can’t relate to it.  Movie producers put a lot of weight behind these screen tests, and a movie won’t receive those crucial, greenlight investments if they are deemed too odd, or too weird, by the normal people participating in these tests.

Movies, and TV shows, can also affect how a weird person perceives their weirdness, in that if a weird person finds one of their characteristics expressed on screen, they’ll know that they’re now perceived as weird, and they’ll adjust accordingly.  Most truly weird people don’t enjoy being weird, until they’re shown that their version of weird is deemed weird by society.  Weird can be interesting, funny, and entertainhing if it’s cultivated and pruned properly, but in the truly weird it grows like a weed among their prized vegetation.  The truly weird don’t have the advantage of constraint that those that engage in the short bursts of weird for entertainment purposes do.  It’s who they are.

If you’re as interested in the weird as I am, you’ll have to cultivate a relationship with them to get them comfortable enough to open up to you.  They may volley some weird thoughts up to you to see if you’ll spike it, and this will prove to be a crucial moment in a relationship with the weird. If you want to progress through the dark caverns of their mind, you’ll simply put another forkful of peas in your mouth.  If you want this whole disturbing trend to end right then and there, you’ll laugh, make a face, and say something like, “I hope you know that’s weird.”  At that point, the weird will recede back into its shell, and the otherwise normal person will conceal their weird thoughts from that point forward in your relationship.

Are you one of them?  The weird?  Don’t know?  Most people don’t.  Consider having a child.  Your child will imitate and emulate everything you do.  Your family won’t see it for what it is, for that child’s oddities are likely theirs.  Your friends may not see it either, because they’ve either adapted to your eccentricities, or they’re too polite to tell you that you have one odd kid on your hands.  Other kids will though.  Other kids will ostracize your weird kid with no compunction, and they’ll tell you—in the most brutal fashion imaginable—where your kid, you, and your people sit on the psych line.

I know some truly weird people.  We all do.  Some of them are fun, and some of them are funny, but most of them have been plagued by a fundamental, from birth, freakdom for much of their life, and they’re not going to purposely display that weirdness just because someone screams “Action!”  It’s pointless to tell these people to act weird, and you can’t force them to be themselves either.  You just do whatever you can to get them to open up and reveal their weirdness while you furiously scribble it into your memory for future documentation.