Lucky is the man who does not secretly believe that every possibility is open to him.” — Walker Percy 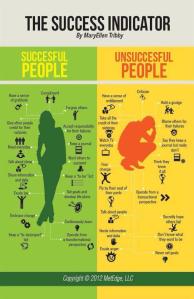 We all have a formula for success, but how flawed are they? How many inconsequential matters make it into our formula? I met a man who achieved a relative amount of noteworthy success. The only problem was he didn’t know how to set an alarm clock, so I showed him … numerous times. Frustrated and embarrassed by this revelation, he stopped me and said, “Just give me a damned wake up call!” He looked at me with a bemused, self-deprecating smile. The smile suggested that he knew this was an embarrassing moment in his life, but there was also a bold confidence in his stance that suggested it didn’t bother him as much as I thought it should. I was so shocked that I could barely return a polite smile. Someone, a mom, a wife, or a secretary obviously made sure his clocks ran on time. The man’s confidence, combined with this lack of knowledge, led me to share this moment with a number of people, until I finally ran into someone who knew who that fella was. “Did you know that that man is the vice-president of one of the most prestigious companies in the world,” they said mentioning the name of the company in question.

It seemed unfair to me that the man who knew so much should achieve so little, while this near infant-of-a-man should rise to the upper reaches of our society. The difference between the two, life has taught me, is tunnel vision.

My friend Kelsey knew no limits. He was one of the more ambitious characters I’ve met, but he had no direction in life. He ended up working next to me. The successful man focused what I considered limited resources in one particular area, until he eventually succeeded beyond 99 percent of most men. Kelsey was an impressive intellect who probably could’ve taken that alarm clock apart and rebuilt it. He was one of those guys who appears to know a surprising amount of something about everything, but he had no particular area of focus, no direction, and thus no arena in which to display his prowess. His potential to succeed was unbound, and we all knew it. He knew it. The man of comparatively, limited resources, presumably learned his limitations early on, and he learned how to hone those few strengths he had to become what we all deem successful.

We’ve all witnessed impressive people before, but how many people do we know that are so impressive that their listeners cannot contain themselves? Most people try to find the one thing that is not impressive about the impressive, so that they can feel more comfortable their less than impressive lives. Most people do not say things like: “What’s he doing here?” … among us?

“If someone were to just give me half-a-(durned) chance … ” Kelsey would complain when I complimented him on his intelligence. The compliment I gave him didn’t please him. It made him more angry about his station in life. “I just-I have so many ideas … ” he complained. He knew so much, about so much, that he was an intimidating force of a man, but he had learned so little in life that he never found out how to capitalize on it. Watching him, one was left to wonder how many learned men in history had so much trouble harnessing their ability that they were deemed a failure by those that knew him? And how many lesser men learned how to harness their limited ability, until they achieved a place in history we all know well?

2) Framing an Argument: Have you ever found out that an overwhelming number of people disagree with something you’ve believed in for so long that it’s now an ingrained truth to you? Is this issue something that you hold so close to your heart, that it pains you to learn that so many disagree with you? The disagreements you’ve heard aren’t simple disagreements either, they’re profound, substantive disagreements that cause you to question everything you once held dear.

The first question that your like-minded cohorts will ask you is what is wrong? Even moral issues are relative when looked at in a certain light. There are no absolutes, they will say. You may love that answer for it falls in line with your philosophy, but it doesn’t satisfy the internal dilemma you’re experiencing, because the contradictory information pouring in is penetrating.

You simply need a course in framing, your like-minded cohorts will say. The art of framing employs the soul of wit: brevity. If you can frame your issue in the form of a sound bite, a lyric, one frame of one cartoon, or a couple of pictures, the world will be your oyster. The particulars of the argument may damn you to the point of being wrong on this particular issue, but you need not worry about the particulars when you’re framing. Your goal, in this the age of 140 words, is to succinctly portray your position in a manner that can be repeated, and shared, until you’re as close to right as you can possibly be without saying the wrong thing, and your brokenhearted brethren will like you for it.

3) LANGUAGE: I’ve always had a passing interest in the French language. When it’s fluently spoken, it can sound so rhythmic and beautiful. I was so taken by the language that I decided to take a college course in French.  It became clear to me (about a month in) how passing that fascination was. I still enjoyed hearing the language though, and I’ve even tried my hand at using some of the language’s more exotic words with all of the umlauts, graves, and aigues in place. It was my goal to speak the language in a manner absent the mundane, specific-to-America renderings. The French word for accessories, accouterments, got a hold of me once, and I began using it as often as I could. It made me feel exotic and a little worldly when my English speaking friends would say, “What?”

“It means accessories,” I would say with a subtle amount of smugness that bathed in the exotic juices of knowing a little French. I finally ran into a native French speaker some time later, and I couldn’t wait to give the word a test drive. I used it in proper context, and I thought I had my elocution down. I had also used the word for years at that point, so I felt confident in the idea that I could now say it without the effort those that had never heard the word used.

When my native French speaking friend said: “What?” I was a little taken aback.

“Isn’t that French for accessories?” I asked.

He asked me to repeat it, and when he was able to pick himself up off the floor, he informed me that most non-native French speakers should just stick with the American renderings.

4) SELF-PROMOTION: Rarely will you read an author write, “I’d like to talk about myself now … ” They’re usually more creative than that, but some of them aren’t. Some of them should spend a little more time trying to creatively frame their indulgence a little better.

I recently put a book down that contained the words: “They don’t want Harlan Ellison messing around with that.” Speaking in the third person can be funny, and some of the times it can be an affectation of funny that leaves the reader thinking that they’re about to go down an unusually funny, self-defecating (sic) path, but this particular fork in the road was not a veiled attempt at humor, nor was it eventually self-deprecating. This was pure self-promotion. This was Harlan Ellison telling the reader that the establishment regards him as a dangerous rascal that keeps on mucking up the status quo to a point that they believe he must be constrained to maintain their precious military, industrial complex. They’re afraid of what Harlan Ellison might tell you, Harlan basically writes. They do not want Harlan speaking out, because they know that his powerful words can cause unrest. Harlan also wants you to know that the establishment, the man, doesn’t appreciate him speaking out, because they’re afraid of his thoughts, and he’s much more powerful than you know (or perhaps than he even knows), but the man knows, and they have tried to find some way of shutting him up. Either that, or the cynic in me believes, that Harlan wants you to feel like an outsider that doesn’t know how truly rascally Harlan can be, so you may want to buy more of his books to find out. When we buy a book, we do want to find out what an author thinks, and we’ve been tantalized by his thoughts through some other medium that led us to being so interested in his thoughts that we wanted to purchase a compendium of them, but when that author qualifies his thoughts in a manner that suggests that he believes that his thoughts are extravagantly provocative, some of us simply tune him out.

5) Quote: Recalling the fifty year anniversary of the legislation, George Will writes of President Lyndon B. Johnson’s Great Society: “In 1964, 76 percent of Americans trusted government to do the right thing “just about always or most of the time. Today, 19 percent do. The former number is one reason Johnson did so much; the latter is one consequence of his doing so.”