If it’s true, as the Chinese proverb states, “A child’s life is like a piece of paper on which every person leaves a mark” could the same principle be applied to TV shows and our sense of humor? 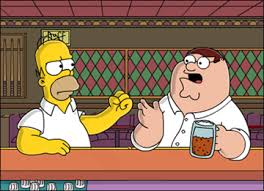 The question that some of us have regarding TV comedies, in particular, is are these comedies popular because they broke new ground, or does it have more to do with the manner in which they tap into the spirit of the age, or the zeitgeist? Family Guy and South Park have both paid homage to The Simpsons, and it could  be stated that they both operated from the template that The Simpsons created, but at some point they may began to expound upon it.  If that’s true, could it be said that these two shows created something that moved us past The Simpsons, or did The Simpsons become such an obvious staple in the culture that it lost its provocative edge in the zeitgeist? Put another way, if The Simpsons somehow managed to outdo both of these shows in the next couple of years in a provocative manner, could it recapture the audience, or is it impossible to recapture that perceived edge once it’s gone? 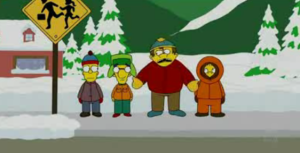 Those looking to be cutting edge, among their friends, are constantly updating their sense of humor.  Whereas The Simpsons used to be perceived as “on the cutting edge” of all forms of groundbreaking humor, it reached a point that TV people call a “Jump the Shark” moment where it was no longer.  The same thing has happened to cutting edge TV comedies going to back to Sanford and Son, All in the Family, The Lucy Show, and The Honeymooners.

A number of books have been written on the psychological study of humor, and how it progresses, and they have attempted to capture this phenomenon.  The question is, is this progression the greater curiosity, or should the greater story of the study of humor, as it pertains to television, focus on the the fact that even though we’ve moved past The Simpsons, it has left a mark on our sense of humor we may never be able to escape. 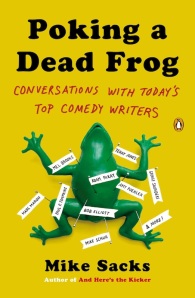 Humor can be dissected, as a frog can, but the thing dies in the process and the innards are discouraging to any but the purely scientific mind … [Humor] won’t stand much poking.  It has a certain fragility, an evasiveness, which one had best respect,” –E.B. White writing in The New Yorker.

As a play on this E.B. White quote, author Mike Sacks titled his book Poking a Dead Frog to provide a thesis for a book that attempts to investigate the art of comedy by interviewing a group of TV and movie writers that may have influenced the core of what modern-day Americans define as funny more than any others.

Working for SNL for as many years as he has, Downey has written numerous sketches with other writers, and SNL’s performers.  He offers an assessment of the difference between the two approaches to comedic presentations that he qualifies may be a broad generalization, but one he believes to be true:

“Writers treat comedy as a science where advances are made, and we must always move forward, never backward.  Once something is done, no matter how groundbreaking it is, it perhaps should be built upon, but never repeated.  For performers, the fact that something has been done before is neither here nor there.  Writers get themselves all tied up in knots worrying if their current material is too similar to other things.

“As for me, I wish originality were prized by audiences, but it doesn’t seem to be that important to them.  Figuring out the right balance is everything.”

In the Downey scenario, the performer can be excused for writing a less-than-groundbreaking sketch, because they’re the ones on stage.  They’re the ones that get the laugh for being funny, or the arrows for the material that isn’t.  Few audience members would excuse a performer for attempting a complicated sketch that didn’t play well on stage, on the basis that it was written by a writer that tried too hard to be groundbreaking.  Likewise, they don’t give the writer plaudits for a groundbreaking sketch that hits the mark.  Most audience members, and critics, give all of the credit and blame for a performance to the performer.  Thus, the performer can be excused for preferring the laugh over the groundbreaking provocation that may not go over as well as it appears to on paper, or in theory.  It’s their career that’s on the line here, their reputation on the national stage.  While the insiders may know the responsible party for the sketch, it’s the performer left with his performance hanging out for all to see that will define him from that point forward.

Once something is done, no matter how groundbreaking it is, it perhaps should be built upon, but never repeated.”

A performer could also be excused for wanting to repeat, or build upon, a sketch that works on the basis that it’s so hard to find one.  A writer, on the other hand, doesn’t think that their groundbreaking sketch can be built upon.  They look at what they’ve done as a concise, “one off” work of brilliance, and any attempts to repeat it would be perceived as forced by the audience.  The performer says nonsense, and applies a far too subtle tweak for the repeat performance.  Assigning their creative brains to the audience, the writer thinks that the audience will see through this far too subtle tweak and recognize the repeat performance for what it is.  They don’t, complains Downey, they enjoy it in a manner they did the first time through, and this confounds writers.

Writers tend to make certain demands of themselves, and the material they release.  The audience, however, is far less demanding.  They just want to laugh, or in all other ways, be entertained.  The easiest way to entertain is to seek the patterns of entertainment that we’ve all seen a million times.  This answer does not count on the people (be they writers or performers) that do it better than us, but on the idea that most humans are more comfortable with the comfort of “getting it” than they are being challenged on some epistemological level.  This was thoroughly covered in the Exit Strategy of Sitcoms blog, and in the What’s So Funny? blog.

Many writers fume over the mundane forms of entertainment that others enjoy.  In my own struggles to find provocative material, I’ve surfed though other blogs to read their “Ruminations on a day in my life”.  Most of these blogs are ten times as popular as the one you’re reading right now, and it’s obvious that most people find the 101 reasons a cat moves across a room at the sound of a can opener more entertaining than a blog on why we fear, or a researched, and original, dissertation on the electromagnetic path between our brain and God.

As a writer of a number of the political sketches done on SNL, James Downey made some assessments of comedian Bill Maher’s brand of political humor:

Bill is a funny guy, but he seems to prefer what (Downey’s former SNL alum Seth Meyers calls) clapter (that is some laughter combined with clapping) instead of actual laughs.  A lot of his (Maher’s) material runs to the “White people are lame and stupid and racist” trope.  It congratulates itself on its edginess, but it’s just the ass-kissiest kind of comedy going, reassuring his status-anxious audience that there are some people they’re smarter than.”

Whether it’s the “ass-kissiest kind of comedy going” from performers giving their audience what they want, or the thought-provoking, groundbreaking comedy that writers try to produce, we all make determinations on comedy.  We all judge what is funny, and what is not, without making conscious decisions about it, and we’re all affected by it in one form or another.

The “Once something is done, no matter how groundbreaking it is, it perhaps should be built upon, but never repeated,” line Downey uses to explain the difference between writers, performers, and what the audience demands defines the difference between writers and their audience on another level.  All writers have received the compliment from an audience member that suggests that you should do a sequel of the story they’ve written, or that they should expound on the theme in one way or another.  This compliment is a double-edged sword in many ways, for while the writer has to love the compliment, the idea of repeating it feels like the idea of repeating it.  The first question a writer has is “How?  How would you have me repeat it?” which of course is not the audience member’s responsibility, but the writer’s.  The point the writer would then make is that they poured their heart out in the story, and while they love you for saying that you thought it was so good that I should just do it again, they also hate you for suggesting that it looked so easy that you should be able to just enter that world again, and do it again, but … different.  Just flip that “on” switch is what they’re saying.  It’s a very writer-esk, artistic thing to say that they can’t just do it again, but as most writers know there is no such “on” switch, unless you’re writing a “ruminations on life” blog that involves cats running to can openers.  Those sequels seem to write themselves, because no one cares, yet everyone cares, and they love them, so writers just pound them out.