It may seem illogical to argue that we’re too free, in lieu of the legislation and monitoring we’re experiencing from the public and private sectors. Yet, Francis O’Gorman’s Worrying: a Literary and Cultural History is not a study of freedom, but one of the common man worrying about how the people, places, and things around us are affected by too much freedom. Mr. O’Gorman makes this proclamation, in part, by studying the literature of the day, and the themes of that literature. He also marks this with the appearance, and eventual proliferation of self-help guides to suggest that readers rewarded writers who provided more intimate, more direct answers. This study leads Mr. O’Gorman to the conclusion that this general sense of worry is a relatively new phenomenon, as compared to even our recent history. 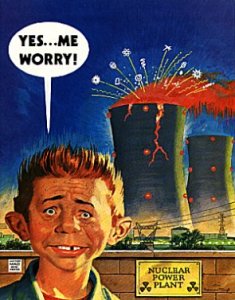 One fascinating concept Mr. O’Gorman introduces to this idea is that the general sense of worry appears to have a direct relation to the secularization of a culture. As we move further and further away from the religious philosophies to a more individualistic one. We might feel freer to do what we want to do under the latter, but we also worry about the susceptibility we have to unchecked consequences and mortal decision making. How do we fill that gap? Some say that if we select the correct politicians to sign the right laws, we’ll be all right. Others say that they can be moral without religion and by choosing a philosophy other than religion. Chrisitianity, say some Christians is a philosophy that teaches that hapiness can be found by living the moral life, and it lays out the tenets of its morality. The theme of Mr. O’Gorman thesis is that without a controlling moral authority, humans worry that they and their peers will, by their nature, become more immoral.

If we have an almost inherent need to be led, how do we replace the tenets of religion? Some choose to align their spiritual guide with politicians. They view these leaders as the religious view prophets, and they view opposing views as heretical. As much as secularists believe themselves fully capable of living without leadership, all political thought revolves around the desire to be led.

Reading through the various histories of man, we learn that our ancestors chose the guiding principles found in The Bible. The general theory, among those who preach the tenets of The Bible is that man’s mental stability, and happiness, can be defined in direct correlation to his desire to suborn his will to God’s wishes. God gave us free will, they will further, but in doing so He also gave us guiding principles that would lead us

If a man has a poor harvest –an agrarian analogy most preachers use to describe the whole of a man’s life– it is a commentary on how this man lived. The solution they provide is that the man needs to clean up his act and live in a Godlier manner. At this point in the description, the typical secular characterization of the devoutly religious comes to the fore, and their agreed upon truth has it that that these people are unhappier because they are unwilling to try new things, and puritanical in a sense that leads them to be less free. The modern, more secularized man, as defined by the inverse characterization, has escaped such moral trappings, and he is freer, happier, and more willing to accept new ideas and try new things. If the latter is the case, why are they so worried?

We’ve all heard secularists say that they wish they could set aside their mind and just believe in organized religion, or as they say a man in the sky. It would be much easier, they say, to simply set their intelligence aside and believe. What they’re also saying, if Mr. O’Gorman’s thesis can be applied to them, is that it would give them some solace to believe that everything was in God’s hands, so that they wouldn’t have to worry all the time.

Like the child who rebels against authority, but craves the guidance that authority provides, the modern, enlightened man appears to reject the idea of an ultimate authority while secretly craving many of its tenets at the same time. A part of them, like the child, craves the condemnation of immorality, a reason to live morally, and for some greater focus in general. As a rock musicians often complain, “I got nothing to believe in.” The randomness of the universe appears to be their concern.

One other cause for concern –that is not discussed in Mr. O’Gorman’s book– is that the modern man may have less to worry about. If social commentators are to be believed, Americans have never been more prosperous:

“(The) poorest fifth of Americans are now 17 percent richer than they were in 1967,” according to the U.S. Census Bureau.

They also suggest that the statistics on crime are down, and teenage pregnancy, and drinking and experimental drug use by young people are all down. If that’s the case, then we have less to worry about than we did even fifteen years ago. It’s a concern. It’s a concern in the same manner that a parent is most concerned when a child is at its quietest. It’s the darkness before the storm concern.

Francis O’Gorman writes that the advent of this general sense worry occurred in the wake of World War I. Historians may give these worriers some points for being prescient about the largely intangible turmoil that occurred in the  aftermath the Great War, but World War I ended in 1918 and World War II didn’t begin until 1939, a gap of a generation of concerned citizens worrying about the silence and calm that precedes a storm. This may have propelled future generations into a greater sense of worry, after listening to their parents’ concerns over a generation, only to have them proved right.

The idea that we worry about too much freedom, as in freedom from the guidelines and borders that religion, or God, can be accomplished without consequences, writes The New Republic writer, Josephine Livingstone in her review of Francis O’Gorman’s book:

“The political concept of freedom gets inside our heads. It is a social principle, but it structures our interiority. This liberty worries us; it extends to the realm of culture too, touching the arts as much as it touches the individual human heart and mind.

“In this way, O’Gorman joins the tide of humanities scholars linking their discipline with the history of emotion, sensory experience, and illness. It’s an approach to culture most interested in human interiority and the heuristics that govern the interpretation of experience: Happiness can be studied; sound can be thought through; feeling can be data.”

Ms. Livingstone furthers her contention by writing that the human mind can achieve worry-free independence, in a secular society, by studying select stories, from select authors:

“Worrying also fits into the tradition of breaking down myths and tropes into discrete units, a bit like Mircea Eliade’s Myth and Reality or C. S. Lewis’ Studies in Words. We care about these books because we need stories about the cultural past so that we might have a sense of ourselves in time. The real value of O’Gorman’s book lies, I think, in the way it flags the politics of the stories we tell ourselves. In its attribution of emotional drives to the ideas behind modernist culture and neoliberal politics alike, Worrying shows that their architects –writers, mostly– are as much victims of emotion as masters of thought. If we can see the emotional impulses behind our definitions of rationality, liberty, and literary craftsmanship, we can understand our own moment in cultural time more accurately and more fairly: Perhaps we can become our own gods, after all.”

One contradiction –not covered in the O’Gorman book, or the Livingstone review– is the trope that religious people are miserable in their constraints. This is ostensibly based on the premise that they fear the wrath of God so much that they’re afraid to live the life that the secular man does. Yet, O’Gorman infers that religious people tend to worry less, because they follow the guidelines laid out in The Bible, and they place their destiny, and fate, in the hands of God. The import of this is that for religious minds, the universe is less random. Ms. Livingstone’s review basically says that the secular life doesn’t have to be so random, and it doesn’t have to cause such concern. She basically states that if we study happiness as if it were an algorithm of either physical or aural data points, and incrementally form our thoughts around these findings we can achieve happiness. She also states that through reading literature we can discover our own master plan, through their mastery of emotions through thoughts and ideas. On the latter point, I would stress the point –in a manner Ms. Livingstone doesn’t– that if you want to lead a secular life, there are the ways to do so and still be worry free. The key words being if you want to. If you’re on the fence, however, a religious person could argue that all of the characteristics Ms. Livingstone uses to describe the virtues of the stories and the authors she considers masters of thought, could also be applied to the stories, and writers of The Bible, and the many other religious books. If her goal, in other words, is to preach to her choir, she makes an interesting, if somewhat flawed case. (I’m not sure how a living, breathing human being, could study a data sheet on happiness and achieve the complicated and relative emotion.) If her goal, on the other hand, is to persuade a fence sitter that secularism is the method to becoming your own god, this reader doesn’t think she made a persuasive case.