If you thought you “unliked” me before, wait till you get a load of this? I thought after dying my hair as a freshman in college. It worked for me before, I thought, in grade school. I sent a shot heard ’round my world, in grade school, with one of the weirdest, wildest hairdos anyone had ever seen. They probably thought I forgot to comb my hair the first day, until I walked into school with that hairdo so often that they could no longer characterize it as an accident. By some measures, it was a total failure in that those who didn’t ostracize me prior to the hairdo did after I walked into school with it for six straight days. If they hated that hairdo that much what will these people think of this, I thought of my dye job? If this experiment was a total failure, in grade school, and I hoped to do it again in college.

My first experiment with shock and failure began when I spotted an older kid on the playground with what I considered a weird and wild hairdo, and I consider it an experiment now, for lack of a better way to describe it. I did not consider it an experiment back then. I thought this was the new me, and I silently forced everyone around me to accept and acknowledge this new me. I loved all of the shock and awe I saw, and I secretly and subconsciously loved the failure. I know that sounds odd, but even in my immature, unformed brain, I found failure more interesting. So, when I look back on it now, I label it my first experiment with self-imposed failure.

When I first spotted that other kid with a shocking hairdo, I thought he was sending a message to us. I didn’t know what that message was, but as I tried to understand it and help him define it, I realized it wasn’t all that important to me what his message was. I thought I might be able to send my own message to those who recently declared me “unliked”, and I considered his hairdo the perfect vehicle. Thus, when I later realized that this kid wasn’t sending a message to anyone, and that he just had a bad case of hathair the day I spotted him, it didn’t take me off course.

How does he get away with that? was the first thought I had staring at the kid. Doesn’t he realize how difficult it is to escape the impressions others have of us once we do something like that? In my underdeveloped brain, I thought this kid was at the forefront of a movement, an “I don’t care what you think” movement, that I wanted to take part in. I thought the message he was sending us was meticulous and carefully orchestrated. I thought it was so outlandish to have such a hairdo that I considered it a little dangerous, and I knew I had to get me some of that.

My other reaction to his hairdo was one of anger. You can’t just wear your hair anyway you want. We have conventions and rules, and you’re shattering them. Look at this guy. He’s taunting and flaunting our accepted way of life. I don’t know if I modified my thinking on the playground, on the ride home from school that day, or at home, but somewhere between that day and the next, I decided I wanted people to react to me the way I reacted to him. I wanted my peers to dislike me for my hair the way I disliked him for his. In some deep, dark recesses of my immature subconscious I thought if I gave them a reason to dislike me, it might clear up some of the confusion I had for why they did. I wanted to say they don’t like me, because they don’t understand me. The truth for me, at the time, was that they knew everything about me, and they understood me. They spent five years with me, so their decision to “unlike” me was an informed one, and it stung so bad that I wanted to do something to suggest that I had some control of it.

I romanticized that kid’s shocking hairdo so much that I showed up for school the next day with my own, individual version of it. The difference between my version and his was that he had what I now know to be a typical hathair crimp that pushed the bottom reaches of the hair out a tad. I enhanced that crimp by pushing my hair all the way up and out, until it was pointing out at 90-degree angles. My classmates didn’t understand it, and they weren’t shy about telling me that I needed to fix it. My teacher went so far as to pull me out of class for a private session loaded with pertinent and professional questions about my well-being. 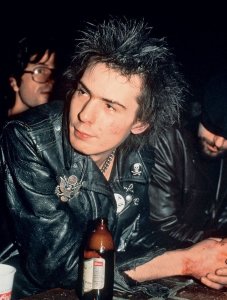 If some characterize this hairdo as going punk rock, I didn’t even know what punk rock was at the time, and I showed it. Going full-fledged, Sid Vicious punk rock requires one to have all their hair standing up and at attention. Sid Vicious punk rockers wouldn’t have understood my decision to maintain sensible hair down the middle. It was my individual, uninformed version of a mullet, except my business was in the middle, and my party was on the sides.

So, my statement wouldn’t have fared well in punk rock circles either, and if I knew that I probably would’ve found that delicious in some odd way that I still find a little unsettling and thrilling. I don’t know what it said about my psychological well-being at the time, but I enjoyed the fact that those who didn’t dislike me before were now uncomfortable being around me or associating their reputations with mine. I also knew they now had a justifiable reason for unliking me.

I’ve never been a punk rock fan, but I understand its ethos, and its greater appeal. To be punk rock is to never try to understand your appeal or lack thereof, and any attempt its purveyors make to understand it is something punk rockers regard as selling out. My personal definition of the punk rock ethos involved shouting out confusion in some primal form of therapy that asks everyone else to question their values and social mores in reaction to you, and it also staves off personal introspection and interpersonal answers that can prove painful.

I also know the origins of the ‘what do you want me to do?’, punk rock confusion. The ‘What do I have to do to get you to like me again?’ war is unwinnable, because if we were to ask them, both parties know their answers would be self-incriminating. So, they wouldn’t want to give us an answer if they had one. How many otherwise insecure pre-teens would answer, “I don’t like you anymore, because I think you’re an …” They don’t answer because most of them are relatively nice people who don’t want to do or say anything awful to people that might come back to characterize them as awful. It’s a no-win situation for them. The idea that they just don’t like us anymore is an unspoken pact that they hope we learn to abide by without further questions. They just don’t like us anymore, one day, because no one else does.

The “unlike” Facebook corollary to my grade school years is apt, if one considers having a Facebook page that everyone follows for years, and then, all of a sudden, for no stated reason, everyone starts to unlike. What do we do in the face of such rejection? An insecure, preteen, assumes their peers have justifiable reasons, or a group rationale, for why, but they don’t want to open that can of worms by asking them. An insecure preteen just assumes this is their new world.

Anyone who has ever been ostracized understands the confusion that starts with people who know us, sitting “together” at different lunch tables. We can’t sit next to them one day, because there are “saved” seats open to everyone but us. When it happens a third and a fourth time, we begin to realize it’s not a coincidence. Our classmates are, for no stated reason, making open declarations that we are “the unliked”. As painful as these declarations are, we can’t say they’re uninformed, because they know everything about us. As much as we say we don’t care what others think of us, the effect of others ostracizing us has lasting effects. We can’t go back in a time machine to ask them what happened. If we ask them why now, they’d say, “That happened so long ago …” We were so confused back then, and we couldn’t understand any of it. We understand some of it now, but it doesn’t diminish the effect.

How many awful things do the they have to say to our best friends, before the foundation of our friendship starts to crack? We thought they were so cool, and that they were the leaders of the thought movement in our world. We thought our friendship was so strong that it should’ve fortified their resolve, but even the greatest arches, built by the most talented civil engineers and architects, have a threshold. We thought everyone wanted to like him, and that he didn’t have to do anything to have others like him, but even the coolest of cool thought leaders eventually have to cut weight if they want others to continue to like them.

In the space of all that confusion, we go punk rock. I don’t know what going punk rock means to anyone else, but I sought out the weirdest and wildest hairdo, and I later dyed my hair, because I couldn’t understand why everyone “unliked” me when I needed them most. As I’m sure the perceptive reader understands, there were many other things going on with this pre-teen to teenage version of me that dwarfed my need for friendship, but I chose to focus on what I thought I might be able to somewhat, sort of control. There were bona fide reasons why they chose to “unlike” me, and it had little to do my personality. If they even flirted with the notion of helping me in anyway, they didn’t know how to go about doing it, so they did what any overwhelmed kid does in such a situation. They tried to avoid the situation by staying away, and as an equally confused teen I didn’t do anything to ease their confusion. I tried to push them further away by physically saying, I don’t need you, and I don’t want to be around you either, and I don’t like you, and I’m going to manifest this shout out with the weirdest, wildest hairdo you’ve ever seen, so we can all fill in these blanks together.

One thought on “I Hated Myself, and I Wanted to Dye”