“We have to describe nothing,” someone with some sort of twisted brilliance probably said at one point in human history to try to advance the cause of the number zero. “How can we properly appreciate the concept of something, without a concrete grasp of nothing?” 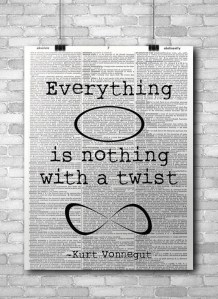 As Andreas Nieder writes in a 2016 paper, “For a brain that has evolved to process sensory stimuli (something), conceiving of empty sets (nothing) as a meaningful category requires high-level abstraction. It requires the ability to represent a concept beyond what is perceived.”

Zero has always been there, lurking in the shadows of the other substantial, something numbers. It’s been there for so long that we take it for granted now. It went through a long, difficult birthing process however. Even in the relatively limited historical record of ancient civilizations, such as those in India, Babylon, and the Mayan, the zero appears. Yet, we don’t know why it made an appearance numerous times in different civilizations. Its birth remains a mystery to us, because its purpose was never defined. They invented a theory of the zero, but they never developed the idea of it as a concretized number. As with most theories, they appear to have failed to apply the concept of it to real world constructs, but we have to give them credit for developing the theory of it. Bottom line, their theory was probably as difficult to grasp for them as it was to explain, because there’s always something.

In a Scientific American article, Charles Seife, author of Zero: The Biography of a Dangerous Idea (Viking, 2000), says “Filling columns is not a full zero. A full zero is a number on its own; it’s the average of –1 and 1.”

“The Number Zero began to take shape as a number, rather than a punctuation mark between numbers, in India in the fifth century A.D.,” says Robert Kaplan, author of The Nothing That Is: A Natural History of Zero (Oxford University Press, 2000). “It isn’t until then, and not even fully then, that zero gets full citizenship in the republic of numbers,” Kaplan says. Some cultures were slow to accept the idea of zero, which for many carried darkly magical connotations.

But Seife is not certain that even a placeholder zero was in use so early in history. “I’m not entirely convinced,” he says, “but it just shows it’s not a clear-cut answer.” He notes that the history of zero is too nebulous to clearly identify a lone progenitor. “In all the references I’ve read, there’s always kind of an assumption that zero is already there,” Seife says. “They’re delving into it a little bit and maybe explaining the properties of this number, but they never claim to say, ‘This is a concept that I’m bringing forth.'”

Kaplan’s exploration of zero’s genesis turned up a similarly blurred web of discovery and improvement. “I think there’s no question that one can’t claim it had a single origin,” Kaplan says. “Wherever you’re going to get placeholder notation, it’s inevitable that you’re going to need some way to denote absence of a number.”

Why did the powers of the zero contain “darkly magical connotations?” As with all cultures, modern and otherwise, the unknown is beyond current capabilities, so we assign mystical, dark, and forbidding connotations to explain what we otherwise cannot. With that in mind, why did someone brave the “here, there be dragons” designation to further the concept, and what was the reaction among their peers?

What twisted, weird, and just plain different theoretician(s) sat in a bathtub and dreamed up ways to further the concept of nothing and zero. If he successfully swayed his peers to accept the premise of this proposed furtherance, how did he answer their “And then what?” questions. Okay, we’ll accept your premise of your newfound importance of a zero, but what do we do with it? Theory is one thing, application is quite another. How do you propose we use it? What purpose will it serve? When we’re building a house, diagramming a structure, or figuring out how to use water in our fields, what purpose does a concrete explanation of nothing serve? Your point of reaching a greater understanding of something through nothing is a provocative one for pointy-headed intellectuals to consider, but how do we apply it to real world concerns?

In my uninformed and admittedly limited search, I found no timeline specifically breaking down the birthing process. Lines that state it was discovered here, mysteriously listed there, and it appeared here, there, and elsewhere in the historical timeline, but in terms of some form of functionality it mirrors the resume of the misspent life of a cousin who never really did anything, but he was always there, until one day he became the star of the family, and no one really knows how that happened.

The most interesting elements to the timeline of the zero are not the who and when, though they are interesting, but the philosophical push of why zero made its way into the halls of Physics, Calculus, Engineering, and a large part of finance and economics to in many cases eventually lead the way to numerous modern advancements.

If dealing with natural numbers, i.e. 1,2,3,…, is dealing with tangible things and events, the zero provided more of an abstract idea for mathematicians. This provided mathematicians greater freedom from real world constructs and representational qualities into high-level abstraction. The eventual inclusion of the properties of the number zero was such that modern mathematics would not be possible without it.

The research suggests that if those brave souls hadn’t weathered the storms, the progress we know today, wouldn’t have been possible. Zero defines nothing and everything at the same time. It can be used in positive and negative ways, and some suggest that those brave souls ended up furthering knowledge to advance Physics, Calculus, Engineering, and a large part of finance and economics. Isn’t it fascinating to think that without a counter-point to something, nothing more would’ve been possible?

When we teach young brains full of mush the difficult concept of counting, we often start them at the number one. Why? Is the zero too difficult for their brains to conceptualize. One, two, and three provide concrete proof of their existence, but the number zero “requires high-level abstraction. It requires the ability to represent a concept beyond what is perceived.”

Zero is also one of the primary languages of the computer. We’ve all heard the phrase ones and zeroes. Zeroes are needed to create code and messages that the computer needs for functionality. If the properties of zero were never invented, discovered, and advanced, it’s possible we wouldn’t have computers.

Even after everything it’s been through and everything it has accomplished for us, we still have no love for zero. The full zero, standing on it’s own, and the average between -1 and 1, represents absolute failure in the classroom, a complete condemnation of our athletic ability on a scoreboard, and some desperation when it appears alone in our bank accounts (zero involves some desperation, but not the total devastation the negative numbers create in this particular situation). We thought calling someone an absolute zero might be worst insult we can say about a person, until Billy Corgan reminded us of its positive attributes. We also thought we had a firm grasp on the traits of nothing, until Jerry Seinfeld redefined it and showed how brilliant it could be. Now imagine going back in time to try to explain to the most brilliant minds in math and science how zero and its resulting concepts have shaped our world. Achieving something is just as important in our time as it is yours, we could say, but our civilization couldn’t have achieved half of what we did without exploring the possibilities of nothing.