@) If we could talk to the animals, my guess is that we’d find that, among others things, we’re the only being that finds flatulence and bowel movements funny.

“Why do you find them funny?” Dabbi the deer might ask.

“Because we find them disgusting,” we’d answer.

“It’s complicated, but it’s further complicated by the fact that you don’t have a sense of humor.”

“I don’t have a sense of humor?” she asked. “I don’t? I’ll have you know that I share the same sense of humor with the rest of the human population. Our sense of humor generates ratings, box office sales, and album sales. You’re the freak of nature.”

&) We never call out dystopian productions from their all-too-near future predictions for being wrong. Young up-and-

coming lyricists are forever in search of meaningful and important lyrics. They can’t write about Lord of the Rings anymore. Led Zeppelin been there done that. Silly Love Songs were Paul McCartney’s domain, and we can no longer write ‘baby’ lyrics, because the 70’s and 80’s bands drained that vestibule. The only avenue left is war, anti-war, and anti-military, but there hasn’t been a real war by first world countries in about 50 years. So, while all of the lyrics written in the interim are meaningful and important lyric, they’ve also been false, so far. “True, but they weren’t talking about today, they were talking the all-too-near future.” So, when do we say they’re wrong. “You don’t!”

$) So, how do young, inexperienced artists craft “meaningful and important” lyrics and dialogue when they know nothing about the real world? Is it more important to be meaningful and idealistic or knowledgeable and realistic?

#) If you’ve ever met a truly tough guy, you know they’ve already done it. They wear a “nothing left to prove” garb for the rest of their lives. We know how tough they are, when we meet the other guys, those who talk tough to show it.

*) If we ever catch up to Alien technology, will medical professionals finally learn that the key to physical and mental health lies in the anus? 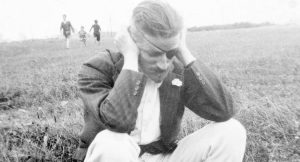 ^) Too much sports knowledge is trivial and useless. Watching sports on TV is supposed to be fun, but some of us get so tied up in good guys vs. bad guys that we forget this is basically a reality show. It’s the best one we’ve ever invented, but it’s still just a show. The next time we meet that guy who knows so much about sports that we’re slightly intimidated by his fact-based opinions, we should liberate him by saying, “Who cares?”

!) You’ll know you’re one of these guys if a lighthearted disagreement over useless and trivial information boils over into you deciding that you’re never speak to the other ever again. At that point, someone needs to step in and say, “Clark, no one cares. You think you’re right, and she thinks you’re wrong, but no one here really cares. We just want to go back to eating our turkey, watching football, and talking about Mary’s Jell-O. That’s all we want to do today.

?) What if she says that your favorite sports star is actually a pretty awful human being? We defend him, because we’re nerds who sit in an audience of millions, and he’s the good-looking, athlete who wouldn’t talk to us in high school. If we pick the right one (he who wins) we want everyone to know our vicarious association. “I’ve followed that guy since he was a five-star recruit. I know his high school stats and college stats by heart.”

%) To counter those who say, “Today’s music ain’t got the same soul,” I would like to introduce you to the noise coming out of Britain. black midi (lower case for whatever reason), Black Country, New Road (one band), Squid, and a band named Famous. These bands are genuinely creative and innovative souls coming out with music that might be as brilliant as the music of past decades, and my guess is they’re only going to get better. Other bands that are also making great noise are Thee Oh Osees (or Osees), and just about everything Ty Segall puts his name on. As with all innovative music, we shouldn’t expect the noise to grab in one blow, and we shouldn’t expect one song to deliver the knockout blow either. Although I think the music from black midi’s Welcome to Hell (not the 23-year-old’s definition of meaningful and important lyrics) might change your interiority by about the tenth listen.

Pitchfork has a few nuggets from black midi’s lead singer Gordie Greep to dispel the notion we have that he wants us to view him as deep, meaningful, and important.

“It’s just fun man,” Greep said. “We’re doing this this stupid thing and somehow making the semblance of a living.” This might be false modesty, as we can be sure he hopes we take his stupid stuff seriously.

Greep also drops a fascinating description of his writing style. “When you want to do something original…use something as a model or inspiration that you know you definitely can’t do,” Greep has said. “Your failure will be interesting.” He talks about Clint Eastwood’s failure to act like Marilyn Monroe, and Tom Waits attempt at the blues. He says they both failed by relative measures, but he says we found their attempts interesting. I found a similar attempt to write like James Joyce interesting.

So, he writes what he doesn’t know, just to see what falls out? What an interesting and perplexing method of writing. My guess, and I have a pretty decent track record in this regard, is that Gordie Greep (whether with black midi or not) is a craftsman who has a relatively bright future.

() I got off on Queen when I was younger. Queen almost single-handedly introduced me to the concept that different can be so beautiful in the right hands, and then I discovered David Bowie. Once I got passed Bowie’s pop songs, I thought he was the most experimental artist in the mainstream, until I discovered Mike Patton. Mike Patton did things I never heard before, and I thought he was the most adventurous artist I ever heard, and I still think that in many ways, but Omar Rodríguez-López (ORL) is just as adventurous in different ways.

Omar Rodríguez-López (ORL) is one of the most gifted artists and musicians on the scene today, and he has played some role, most often leading it in some creative manner, in over fifty albums. I purchased an At the Drive-In album, and I purchased a couple of Mars Volta albums, but for some reason they never appealed to me. If it hadn’t been for Ipecac Records releasing his solo recordings, I never would’ve discovered the genius (and I do not use that term lightly) behind the music of those previously mentioned bands.

As with any mercurial genius, much of ORL’s solo albums will not appeal to most palettes, but the true music fan will probably go nuts over about twenty-four of the fifty albums. When I approached Omar Rodríguez-López music, I had no idea what to expect, but he violated those expectations in the most obscene manner possible. Such violations are not immediate, as they rarely are. My first love was Roman Lips. Anytime a friend invites me to listen to complicated, difficult music, I suggest he do so by starting their most accessible album. Roman Lips is probably the most accessible ORL album, followed by Blind Worms, Pious Swine. Beyond that, the ORL solo albums are impossible to categorize, list, or breakdown by category. Suffice it to say that I was wary that the genius behind At the Drive-In and Mars Volta would appeal to me. I was also wary of the Ipecac Recordings, as they release a lot of material that major recording studios won’t, and a number of their albums don’t appeal to me, but ORL.

As with all of the artists listed above, it’s difficult to believe that these individual artists, and Queen, are capable of such wide-ranging music. I love some of the more major, mainstream pop acts, but there is a comfortable thread that runs through most of them. Their fifth album might sound more advanced than their first in production value and matured writing, but we all know what kind of music they prefer. Listening to the albums put out by Bowie, Patton, and Omar Rodríguez-López, it’s hard to believe the same artist created all these incredible albums. ORL is definitely the most prolific of the three, and he’s not even fifty-years-old at the time of this article.